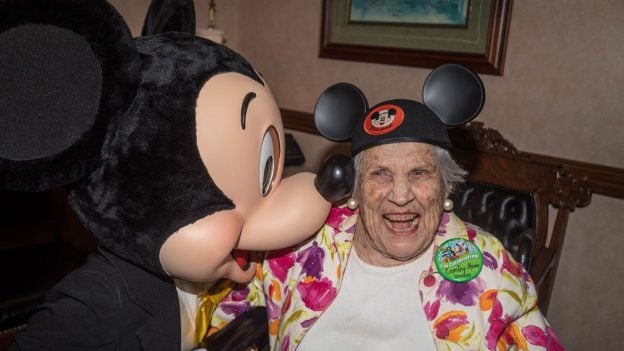 After 23 years, 96-year-old former cast member Kay Wittmack recently returned to the Disneyland Resort for the first time with the help of her niece, cast member Susan Hibbert. Susan works in attractions and is a trainer in Fantasyland and has always enjoyed hearing her aunt recount her years as one of the resort’s original cast members. Kay worked at the Emporium on Main Street, U.S.A. from 1955-1958 (until the early 60s, the Emporium was operated by a separate company).

Wanting to make Kay’s return extra special, Susan went to Guest Relations cast member J’Amy Pacheco for help. Together, they were able to arrange for Kay to meet with Mickey Mouse, tour Walt Disney’s apartment over the fire station and ride her favorite attraction, “it’s a small world.” Kay, a World War II veteran, also was recognized during the daily flag retreat ceremony in Town Square.

Current cast members at the Emporium were excited to chat with Kay about her memories working there and seeing Walt Disney stop by. “He always came out and said hello to everybody,” Kay said. She also noted how much the resort has grown, and that it “feels wonderful.”

Susan is proud to carry on her aunt’s legacy at the Disneyland Resort. “She’s always been so special to me,” Susan said. “Making magic is something I adore doing every day, and I know that when I train [cast], I’m passing that legacy on.”