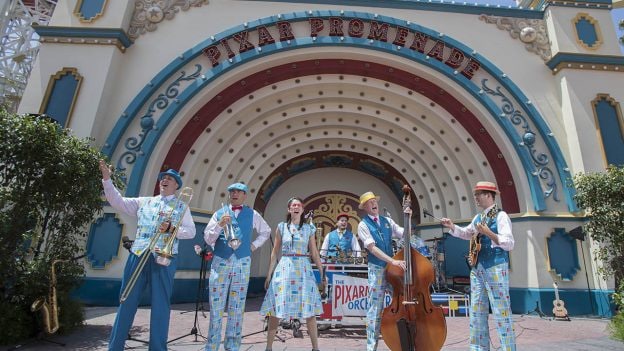 Next up along our tour of Pixar Pier in Disney California Adventure park is Pixar Promenade!

This charming seaside promenade is inspired by classic turn-of-the-century California boardwalks. The reimagined area celebrates the heartwarming stories and beloved characters from all Pixar films. Join us on a tour of Pixar Promenade!

The focal point of Pixar Promenade is the soaring Pixar Pal-A-Round. As you step up to the attraction, you’ll notice different pairs of Pixar pals on each of the 24 gondolas!

Another prominent feature is the classic band-shell stage, where you may find The Pixarmonic Orchestra performing its repertoire of fun tunes. At Bing Bong’s Sweet Stuff, discover a treasure trove of candies, souvenirs and trinkets. For some savory bites, head over to Angry Dogs, where the dogs heat up as Anger from “Inside Out” burns with rage!