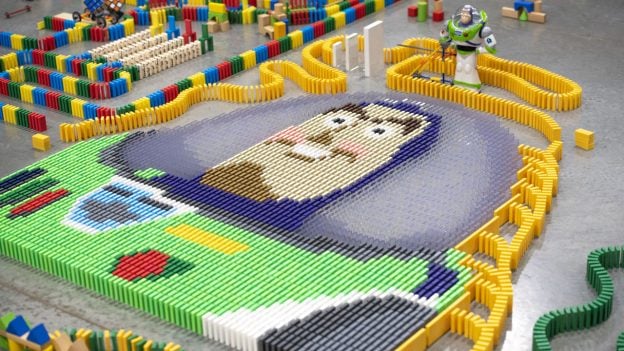 To continue our celebration of the new Toy Story Land at Disney’s Hollywood Studios, we decided to “PLAY BIG” with an elaborate, one-of-a-kind maze of dominoes you must see to believe.

Lead domino artist and popular YouTube star Lily Hevesh, who is also a huge fan of Disney Parks and Toy Story Land, started the chain reaction by rolling the iconic Pixar ball into the first of the dominoes. What took Lily and a team of four other expert domino builders nearly a week to set up at the Sports Complex, toppled in less than five minutes.

Watch the mesmerizing video of 32,000 dominoes falling down:

In the video, you’ll notice several complicated domino tricks paying tribute to the new immersive land at the Walt Disney World Resort, including the first trick of sending Alien Swirling Saucers toys into a string of dominoes. Other “wow” moments include a Slinky Dog toy propelling a ball through a Slinky toy as well as a domino fall activating a Buzz Lightyear Bubble Blower toy.

And as a finale, a large domino wall falls to reveal signs from Toy Story Lands and Disney-Pixar experiences at Disney Parks around the world. Do you recognize any?

During the six-day process of setting up 32,000 dominoes, the Disney Parks Blog team joined Lily and the domino builders to see how the magic happens. Check back soon for a special Disney Parks Blog behind-the-scenes look at this amazing Toy Story Land-inspired creation.