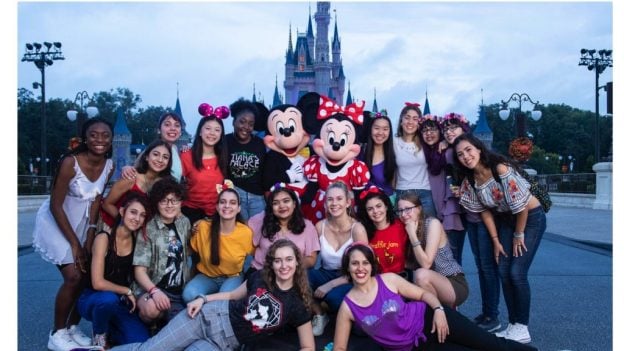 This week, Disney launched a new global #DreamBigPrincess video series that puts the next generation of female storytellers behind the camera to tell the stories of inspirational role models across technology, entertainment, medicine, law, sports, arts, science, fashion and politics.

A group of 21 talented young women from different corners of the globe captured the stories of these female trailblazers in videos that will be shared across Disney’s media platforms as part of a campaign to unlock up to a $1 million donation to Girl Up, an initiative of the UN Foundation.

Following the launch of the video series, the young women from the UN Foundation’s Girl Up initiative, who produced and directed Disney’s new #DreamBigPrincess global video series, joined us at Walt Disney World to celebrate International Day of the Girl.

Also, in celebration of the #DreamBigPrincess video series and International Day of the Girl, Disney Parks guests around the world dressed in outfits inspired by their favorite female Disney characters. Check out some favorites and visit our original #DreamBigPrincess story to learn more.

And until November 20, 2018, for each like or share of a public video or photo with #DreamBigPrincess on Facebook, Instagram or Twitter, Disney Worldwide Services will donate US $1 to Girl Up, the United Nations Foundation’s program supporting girls’ leadership and empowerment (minimum donation: $500,000/maximum donation: $1 million). For more information about Girl Up, go to girlup.org.

We also kicked off a new “All in the Details” series on the Disney Parks Blog this week featuring our favorite spooky attraction at Disney Parks – the Haunted Mansion at Magic Kingdom Park.

In the first video, Imagineers Steve Vagnini, Stacy Shoff and Diana Brost point out some of the “happy hints” guests can spot in the Haunted Mansion’s cemetery queue that give a nod to the attraction’s larger storyline.