Today is World Okapi Day, and I believe there’s no better way to celebrate this magnificent animal than announcing the birth of one more!

Disney’s Animal Kingdom Lodge is celebrating the birth of a rare okapi, who was born on Oct. 1 to mom Zelda. Weighing in at 54 pounds, the calf was up and mobile within the first hour of his birth. He has been nursing and bonding with his mom. The pair will remain in a backstage habitat for the next few months before joining the animals on the savanna.

The calf’s parents – mom Zelda and dad Mandazi – were chosen to breed through the Species Survival Plan (SSP), which is overseen by the Association of Zoos and Aquariums (AZA) and ensures responsible breeding of threatened and endangered species.

When I visited the okapi care team recently, keeper Kim Thomson expressed how excited she was to care for a new calf and how it changes the dynamics of her team’s routine.

“We will spend a lot of time conducting observations on mom and calf making sure the calf is bonding well with mom, nursing well and basically hitting all of the milestones we would expect of a growing okapi,” Kim said.

Okapis are an endangered species found in rainforests of the Democratic Republic of Congo. Known as the ghosts of the forest, okapis are shy, reclusive and rarely encountered in the wild. In fact, they weren’t even discovered until 1901. There are an estimated 20,000 okapi in the world, and their population continues to decline due to poaching and habitat loss from commercial logging and mining.

To learn more about okapis and other animals you can visit at the Walt Disney World Resort, visit DisneyAnimals.com. 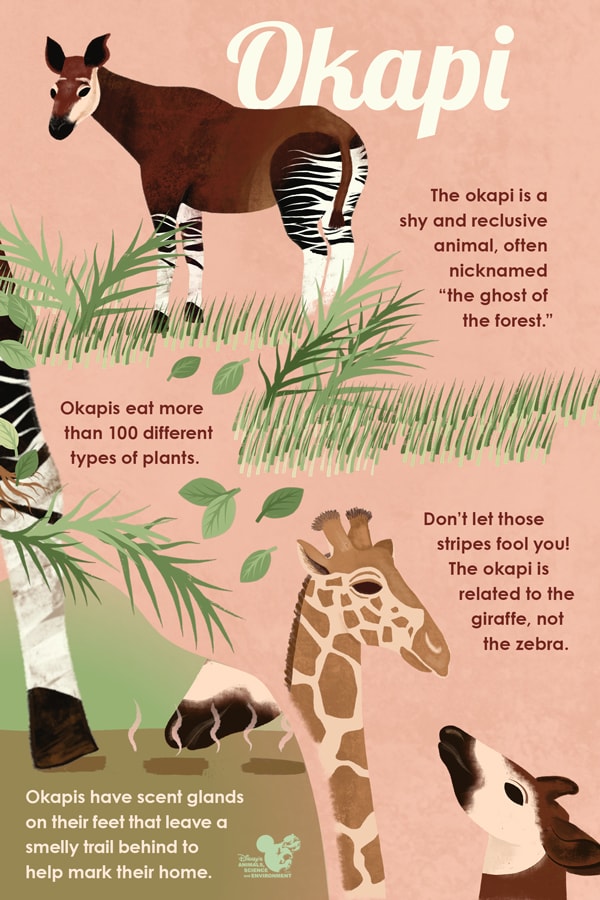