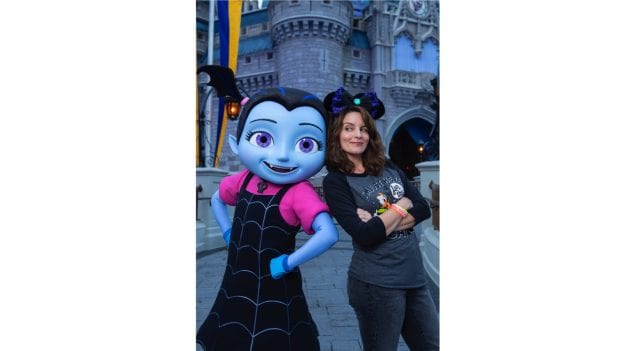 Actress Tina Fey recently vacationed at Walt Disney World Resort with her family. During her visit at Magic Kingdom Park, she met the lovable vampire from the hit Disney Junior series, “Vampirina.”

The two posed together during Mickey’s Not-So-Scary Halloween Party, where Vampirina makes regular appearances during the all-new Storybook Circus Disney Junior Jam. Vampirina also brings spooky fun to Disney’s Hollywood Studios, where she greets guests during the Disney Junior Play ’n Dine at Hollywood & Vine. And, beginning in November, she will be meeting guests daily in Animation Courtyard at Disney’s Hollywood Studios in a replica of her room.

For those traveling to the West Coast … fear not! You can meet Vampirina, too. She’s stopping by Disneyland Resort for Halloween Time and also meets fans at Disney California Adventure park. Keep checking back at Disney Parks Blog for more information on Halloween fun at Disney Parks!