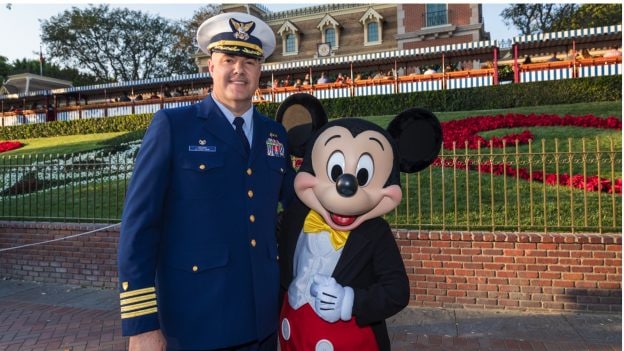 The Disneyland Resort is fortunate to have hundreds of cast members who are veterans or serve in the military reserves. Andy Grenier, manager of Architecture & Facilities Engineering Facility Sustaining Support, has worked at the resort for 13 years, and has served our country in the United States Coast Guard – first in active duty, now in the reserve – for nearly 30 years.

Andy, who is now a Captain in the Coast Guard Reserve, learned many of the skills he currently uses in his role at the Resort while serving in the military. When he was serving on active duty in the Coast Guard, he received a M.S. degree in Fire Protection Engineering, which is part of his role at the resort – designing systems that keep buildings and people safe from fire danger. Andy credits his time in the Coast Guard for many other skills useful to the workforce. “The military is a leadership laboratory,” Andy said. “Every day, I use those same leadership skills here — inspiring people in the workplace, leading by example.” One particular skill learned in the military that serves Disney cast members well is attention to detail. “Attention to detail matters at Disney for everything from safety to show standards. This is an approach taken in the military as well.”

Andy also serves a leadership role in the Diversity Resource Group SALUTE, a group of cast members who are committed to enhancing the Disney experience for those who have sacrificed in support of the military. This very diverse group is made up not only of veterans who served on active duty and reserve, but cast members who have family members or loved ones who are veterans or currently serving. The group is called upon to offer their unique perspective with insight and expertise on military culture and how that can affect our business, with topics ranging from marketing efforts, to workplace initiatives, to entertainment offerings like the daily flag retreat.

“The company is very supportive of those who have served or who are currently serving in the military reserve,” Andy noted. Those who serve in reserve duty are typically required to serve 36 days a year, but Andy is sometimes called away more frequently or for longer durations. In 2010 Andy was called away for 60 days to support the response effort for the Deepwater Horizon oil spill in the Gulf of Mexico. Most recently, he was serving in Hawaii for a joint military exercise which unexpectedly rolled into a hurricane response when major Hurricane Lane swept through the Pacific in late August.

On this Veterans’ Day, we salute Andy and all the cast members who have served our country.