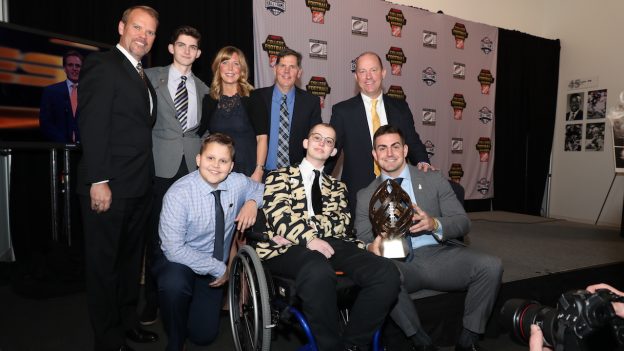 Tyler Trent, the Purdue University student who inspired many this football season, took home the 2018 Disney Spirit Award on Thursday night during the College Football Awards on ESPN, a tribute to his courageous battle with bone cancer.

Trent, the 20-year old native of Carmel, Indiana, was diagnosed with bone cancer in 2015, but he has refused to let the disease get the best of him.  In 2017, Trent was determined to start classes at Purdue on time, and after enduring several surgeries, multiple procedures having his pelvis removed 11 days before the fall term, Trent did just that.

And despite all the medical treatments, appointments and days when he’s not feeling great, Trent has become a fixture around the Purdue football program – a tribute to his unwavering dedication to his beloved Boilermakers, serving as the team’s honorary captain.

Trent’s decision to live life on his own terms has also provided hope, encouragement and optimism to legions of fans of college football because of the courageous manner in which he has faced the disease — determined, unbowed and unafraid.

Trent accepted the Disney Spirit Award from Purdue senior quarterback David Blough, and thanked everyone present for the opportunity to share his amazing story.

“This award is undeserved,” Trent said. “A year ago, I prayed that I would have an opportunity to share my story, and now it’s come true. At the end of the day, there is always a light at end of the tunnel. As long as you rely on your faith, things will work out.”

To see the amazing moment when Trent accepted the 2018 Disney Spirit Award, check out this video.