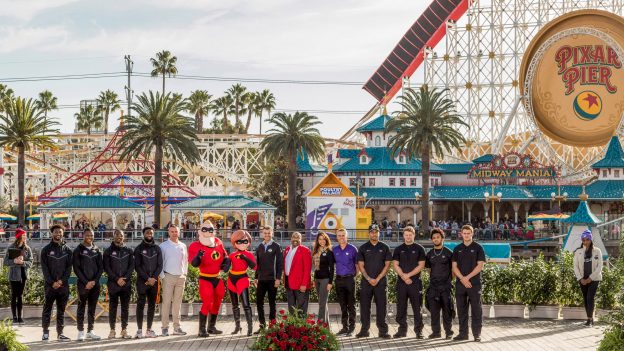 Today, The Ohio State Buckeyes and the University of Washington Huskies made their first stop on the way to the 2019 Rose Bowl Game presented by Northwestern Mutual in Pasadena, Calif., with a traditional visit to the Disneyland Resort!

Before meeting on the field, the teams joined earlier today for their first official pregame appearance, in a ceremony at Disney California Adventure park. During the ceremony, Ohio State head coach Urban Meyer and Washington head coach Chris Petersen were welcomed by Disneyland Resort President Josh D’Amaro along with Tournament of Roses President Gerald Freeny. After the ceremony, players and coaches from both teams posed for a photo with Mr. and Mrs. Incredible before experiencing the Incredicoaster in the newly opened Pixar Pier.

The teams will face off in the 105th Rose Bowl Game on New Year’s Day. Ohio State finished the regular season with a record of 12-1 and claimed the Big 10 Conference title, while Washington defeated Utah to win the Pac-12 Championship, finishing with a 10-3 record.