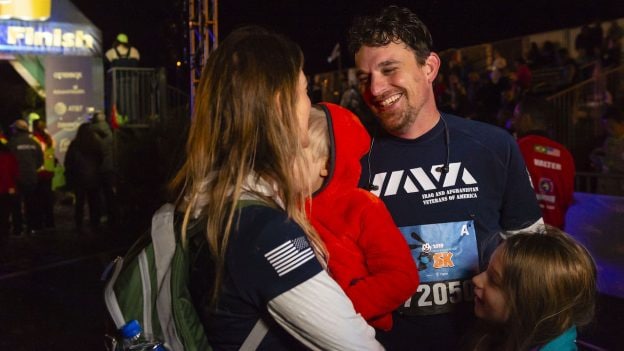 When you consider all of the obstacles Eric Donoho has overcome – the head, neck and brain injuries, the suicides of close friends and the cancer diagnosis and multiple miscarriages suffered by his wife – it’s a miracle he is still standing. Yet this resilient Army veteran is not just standing, but thriving thanks to the sport of running, which led him to participate in the Walt Disney World 5K during Walt Disney World Marathon Weekend presented by Cigna.

Eric, from Indianapolis, Ind., has already endured a lifetime of challenges. Shortly after he was deployed to Iraq, his wife suffered the first of several miscarriages. Then, Eric was severely wounded in combat, sustaining head, neck and brain injuries. After returning home, hard times continued – his wife was diagnosed with cancer and he lost two of his military friends to suicide.

But running has been, quite literally, a lifesaver. Through the support of an Iraq and Afghanistan Veterans of America (IAVA) program funded by a Cigna Foundation grant, he has used running to help ease life’s many pains, making him an inspiration for others who are battling similar challenges. Buoyed by the fact that he and his wife have since had two healthy children, he ran the Walt Disney World 5K last week and gained admirers every mile.

Take a look at this video of Eric’s story:

If running and Disney magic sound like a great combination for you, there is still time to be a part of the next runDisney race weekend at Walt Disney World Resort! Visit runDisney.com to learn more about the Disney Princess Half Marathon Weekend presented by Children’s Miracle Network Hospitals (Feb. 21-24) and Star Wars Rival Run Weekend presented by OtterBox (April 4-7).