When I was in college, I spent a semester studying in Spain. The experience gave me an appreciation for the Spanish culture in a way reading about it in books never quite could. The food and the architecture were two of my favorite discoveries – flavors I had never dreamed of and buildings that seemed like they were from a fairytale. You can imagine my delight when I learned that celebrated Spanish chef José Andrés would be opening a restaurant at Disney Springs – I’ve been dreaming about paella and sangria ever since!

Jaleo by José Andrés is expected to debut this winter at Disney Springs, and when the doors open in the coming weeks, guests will discover a 22,000 square foot wonder that will house Andrés’ largest restaurant to date. 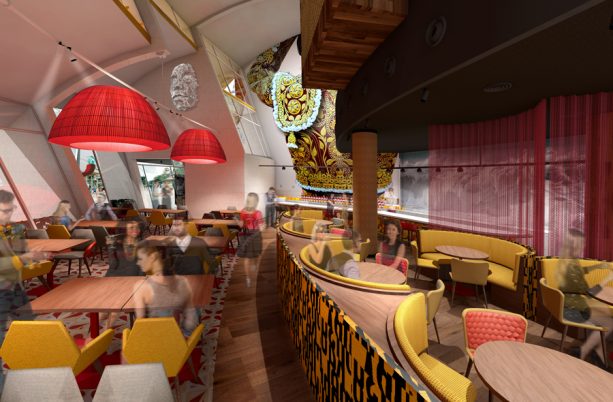 The venue will bring the spirit and flavors of Spain to Disney Springs visitors via a freestanding, two-story building with a design that was strongly influenced by the artichoke – a vegetable native to Andrés’ homeland. While I could never quite figure out exactly what to do with the beautiful food, renowned Spanish design firm Capella Garcia Arquitectura used it as their ultimate inspiration, working closely with José Andrés’ ThinkFoodGroup to ensure that every detail of the striking design was just right. In this rendition, an artichoke structure opens up with “petals” that form pergolas, seamlessly extending to the outdoors. With no solid walls, the space is completely open to the outside and features large windows that offer picturesque lake views and an impressive central courtyard that visually connects both floors. Juli Capella, principal for the design firm shared, “There are no cubic forms, no opaque walls, no straight lines: here reigns a plant-like organicism with its dynamic forms. An avant-garde, expressionist and welcoming architecture.”

It sounds like a work of art with a color palette showcasing citrus shades like orange and lemon paired with stunning photos and paintings from some of Spain’s most celebrated photographers and artists.

If you’re like me and you can’t wait to visit, keep an eye on The Disney Parks Blog for details on the menu and updates on when the restaurant will open. You can also follow @DisneySprings on Instagram and Twitter for the latest Disney Springs news and happenings. In the meantime, I’ll be brushing up on my Spanish!