A Tour of the Hidden Epcot Art Gallery: The American Adventure – Part One

In a recent Legacy post, the remarkable art and cultural legacy of World Showcase was featured. The culture of Disney itself is so richly populated with talent that in some cases, throughout the Company and around the world, there are caches of “forgotten” cultural wealth, riches of Disney artistry that are hiding in plain sight.

Within World Showcase at Epcot is another remarkable art gallery, one that has been on display for decades but, perhaps, even the most ardent Disney enthusiasts don’t even know about.

Most people are familiar with The American Adventure, the epic story of the United States and the people, ideals, and conflicts of its ongoing story. The dramatic production features a cast of 35 Audio-Animatronics figures, ten different sets stored under the stage and moved forward or backward on cue, digital images on a majestic 72-foot screen, and a stirring musical score.

The stunning building in which it is housed was intended as a “people’s mansion,” taking design cues from the classic Georgian style of the late 1700s, Colonial Williamsburg, Independence Hall, Thomas Jefferson’s Monticello, and the Old State House in Boston.

But on the way to take a seat inside the stately theater, guests are likely to bypass a remarkable one-of-a-kind exhibit within the theatre rotunda, featuring original art works by an utterly unique assembly of fine artists, motion picture designers, Disney Legends, and Academy Award winners.

One of the most peculiar conventional wisdoms about Disney is that somehow, because the medium is entertainment (and wildly popular), the art created for Disney is somehow “less than” or inferior, or not “fine art.”

“Many of the artists who worked at Disney Studios — and the other movie studios in the mid-20th century, and on up until today — were impeccably trained fine artists,” says Mary Platt, Director of the Hilbert Museum of California Art at Chapman University. “In fact, a majority of them did fine art ‘on the side’ and continued to do so even after they took jobs at the movie studios. Mary Blair, for example, and her husband Lee, who both worked for Disney, began as fine artists who both graduated from Chouinard (now CalArts) and exhibited outstanding paintings. Eyvind Earle may be best known for his work on Disney’s “Sleeping Beauty,” and other animated features and shorts, but he also made a living as a fine art painter with a highly distinctive style. Herb Ryman graduated with honors from the Art Institute of Chicago, and Robert McCall was a very accomplished magazine illustrator whose work also appeared on U.S. postage stamps. Their talents were so expansive that even the movies couldn’t contain them.”

Here are some of those artists, and their original art pieces represented in The American Adventure:

“The Promise of America” is an epic interpretation of the American immigration experience by Disney Legend Herb Ryman a prime example of an artist who bridged the commercial and fine arts throughout his long career, with work in one sphere inspiring the other. 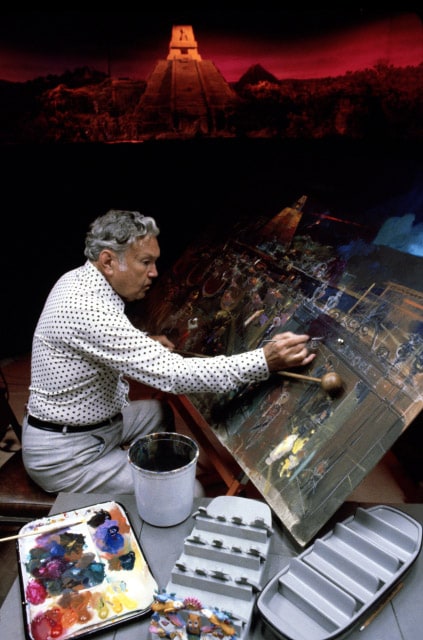 Herb created the first overall illustration of Disneyland, working directly with Walt as he described his dream for a new kind of family entertainment, and continued to work on every Disney theme park until his passing in 1989. Ryman was also an exhibiting fine artist, a member (and president) of the California Art Club. He was particularly prolific in pen and ink, watercolor, and oil. His work was shown regularly in galleries as early as 1937 in New York, Los Angeles, and other cities.

An educational enterprise that bears his name, Ryman Arts, teaches classical drawing and painting to talented and motivated high school students as a bridge to a lifetime that expresses and appreciates the arts.

“Westward Ho!” portrays a highly cinematic view of the European expansion into the American West, and it’s no surprise in that it is the work of multiple Oscar-winning production designer Jack Martin Smith. The artist joined MGM in 1937, and two years later found himself working as a production designer on “The Wizard of Oz.” He spent most of his working life at MGM on classics such as “Easter Parade,” “On the Town,” and “Show Boat.”

Jack moved to 20th Century Fox, where his work included “Carousel,” “Cleopatra,” “Fantastic Voyage,” “Planet of the Apes,” “Butch Cassidy and the Sundance Kid,” “Hello, Dolly!” and “M*A*S*H”; as well as TV series such as “Voyage to the Bottom of the Sea,” “Lost in Space,” and “Batman.” His last film before his retirement was the 1977 Disney classic “Pete’s Dragon.”

“Giving Thanks” is a Rockwellian observation of the American family by Disney Legend Sam McKim, an artist whose career as a Walt Disney Imagineer included a generation of souvenir maps of Disneyland, and many drawings, sketches, and paintings for other Disney Parks and projects. Sam began as a popular child actor in numerous B-westerns in the 1930s, but as he approached adulthood decided to pursue a career in art. 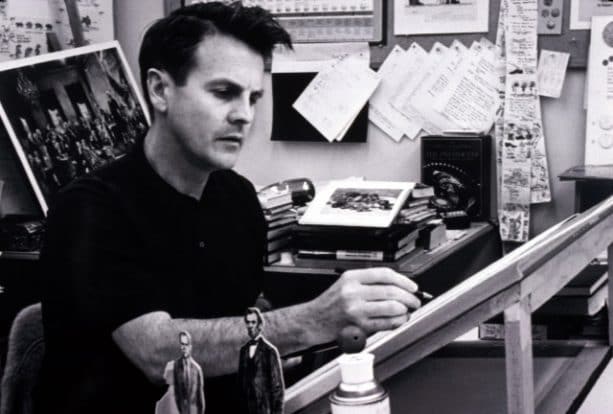 Sam McKim at work on Hall of the Presidents at WED Enterprises. © Disney

He joined WED Enterprises (now Walt Disney Imagineering) as an illustrator in 1954, the year before Disneyland opened. Among Sam’s first assignments were art works for attractions, shops, and restaurants on Main Street and in Frontierland, including the Golden Horseshoe Revue. He played a part in all of the Disney attractions at the 1964-65 New York World’s Fair; as well as Hall of Presidents at the Magic Kingdom in Florida.

In a future post, we’ll look at even more of the art and artists whose original art works are on display within the “hidden” Epcot Art Gallery at The American Adventure.

Likes (3)
Share A Tour of the Hidden Epcot Art Gallery: The American Adventure – Part One