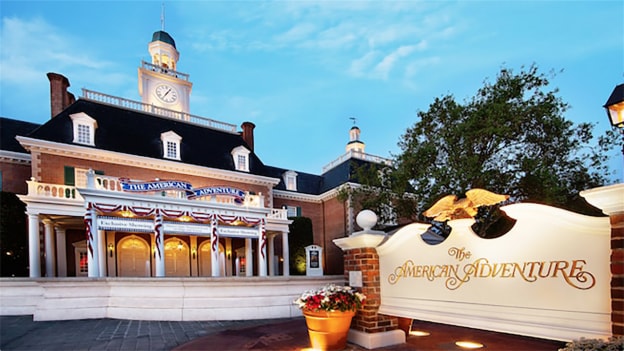 A Tour of the Hidden Epcot Art Gallery: The American Adventure – Part Two

In a recent Legacy post, we opened the door on a remarkable and one-of-a-kind gallery of original Disney art, a cache of “forgotten” Disney artistry and original art works by an utterly unique assembly of fine artists, motion picture designers, Disney Legends, and Academy Award winners, a treasure trove that hides in plain sight every day in the rotunda of The American Adventure at World Showcase in Epcot.

“Staying the Course” is a seafaring epic representing Trans-Atlantic European immigration by Oscar-nominated artist, painter, and special effects artist Mike Lloyd. Renowned for his matte and effects work on such films as “Raiders of the Lost Ark,” from 1983 through to 1990 Mike assumed leadership of the Disney Studios matte department, in that time working on such varied projects as “Dick Tracy,” “Baby: Secret of the Lost Legend,” and “Return to Oz;” for which he was nominated for the Best Visual Effects Oscar (shared with Zoran Perisic, Will Vinton, and Ian Wingrove). His other film work includes “Independence Day,” “The Lord of the Rings: The Fellowship of the Ring,” “The Lord of the Rings: The Two Towers,” “The Chronicles of Narnia: The Lion, the Witch and the Wardrobe,” and “Avatar.” 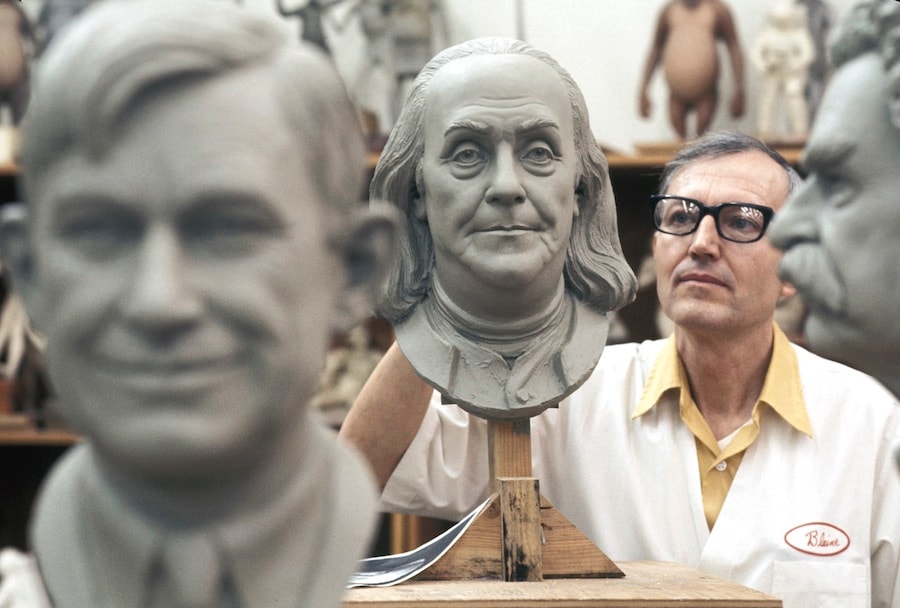 Blaine Gibson at work in the Imagineering Sculpture Studio. © Disney

“Passing the Baton” is unique in this exhibit because it is a bas relief sculpture rather than a painting, appropriate to the work of Disney Legend Blaine Gibson. Gibson started in Animation at Disney on films such as “Lady and the Tramp,” “Sleeping Beauty,” and “101 Dalmatians,” but after Walt learned of Blaine’s hobby and saw one of Blaine’s sculpture exhibits, he moved Blaine from animation to Walt Disney Imagineering.

There, Gibson created the sculptures for Walt Disney’s Enchanted Tiki Room, Great Moments with Mr. Lincoln (and every president at Hall of Presidents at Walt Disney World Resort, up until George W. Bush in 2001), Pirates of the Caribbean, the Haunted Mansion, and “it’s a small world.” Although he officially retired in 1983, Blaine continued to contribute sculptures for The Great Movie Ride at Disney’s Hollywood Studios and the beloved “Partners” statue of Walt and Mickey Mouse.

“Defending Freedom,” picturing the massive World War II aviation manufacturing efforts, and is the work of R. Tom Gilleon. Raised by his grandparents in the tiny outpost of Starke, Florida, Gilleon studied at the University of Florida, and joined the US Navy in the early 1960s. He then studied at Ringling College of Art and Design and subsequently took a job as an illustrator for NASA’s Apollo space program. Since that time, he has spent many years contributing concept art for dozens of projects at Walt Disney Imagineering, including Epcot and New Tomorrowland at the Magic Kingdom, as well as work as an illustrator and storyboard artist on films such as Dick Tracy.

The talent of scenic artist Clem Hall (1913- 2003) is showcased in three works, “Election Day,” “Building a Future Together,” and “Compassion Knows No Bounds.” Another film industry veteran, Clem worked in the art departments of MGM, Paramount, the Walt Disney Studios, and finally at Walt Disney Imagineering. His art there was created for the development of the Pirates of the Caribbean and the Haunted Mansion at Disneyland, and for Space Mountain and Big Thunder Mountain Railroad at both Disneyland and Walt Disney World Resorts, and on several of the World Showcase pavilions.

“A Lesson for the Future,” a romantic visualization of American educational ideals, is the work of illustrator, animation artist, and painter of the Old West Guy Deel (1933–2005). Guy studied under famed illustrator and art director Pruett Carter on a scholarship to the Art Center College of Design, as well as studying sculpture at the Otis College of Art and Design. At the Walt Disney Studios, Deel designed clever main title sequences for such films as “The Shaggy D.A.” and “The Strongest Man in the World;” and was a key layout/workbook artist on “The Rescuers,” and production stylist on “Oliver & Company.” He was a character designer on “The Lion King” and “Pocahontas;” and contributed visual development to “Tarzan,” “Fantasia 2000,” “The Emperor’s New Groove,” “Treasure Planet,” and “Brother Bear.” His Old West Illustrations graced the pages of national magazines as well as the book covers of leading Western authors. 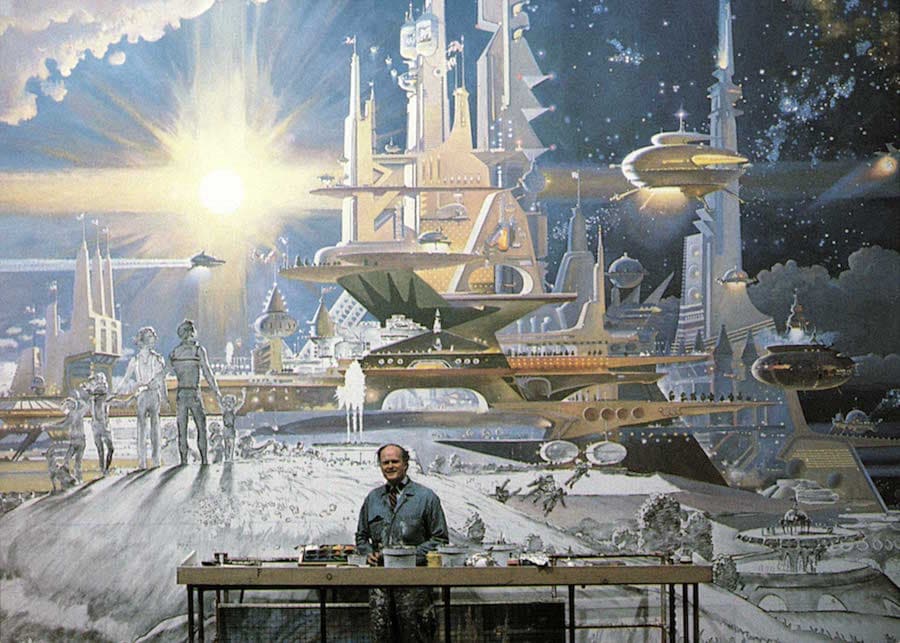 Robert McCall at work on one of his murals for the Horizons pavilion at Epcot. © Disney

“Reaching for the Stars” is an ambitious and erudite view of space exploration, the work Robert McCall, (1919-2010), who came to public attention in the early 1960s as the illustrator for LIFE magazine’s series on the future of space travel. At that time, he became one of a few artists to be chosen for NASA to document the progress of American space history. His work is on permanent exhibit at the National Gallery of Art, and he has done murals for the National Air & Space Museum, the Pentagon, and Johnson Space Center. His murals for the Horizons pavilion at Epcot — views of the future human settlements Nova Cite, Brava Centuari, and Sea Castle, as well as the optimistic “The Prologue and the Promise” in the exit area—were especially beloved, his motion picture work includes “2001:A Space Odyssey,” “The Black Hole,” “Tora! Tora! Tora!” and “Star Trek: The Motion Picture.”

The mural “The Prologue and the Promise,” once displayed at the Horizons pavilion at Epcot. © Disney

Books such as The Poster Art of the Disney Parks and Maps of the Disney Parks also do much to reveal and celebrate such “hidden gems” of great Disney art—and the artists who created them—but when you are at Epcot, be sure to make some time to peruse one of the best kept secrets of World Showcase in person—the “hidden” gallery at The American Adventure.