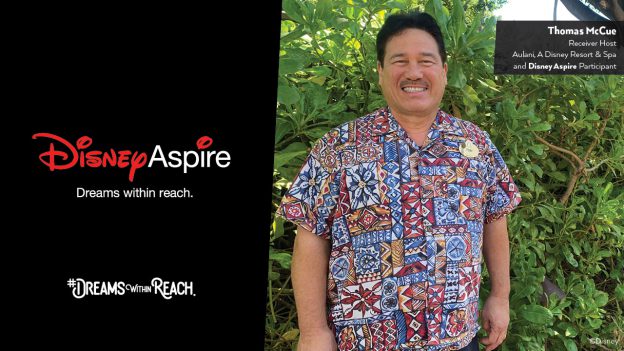 Dreams Within Reach: Aulani Cast Member Heads Back to School with Disney Aspire

In this installment of our #DreamsWithinReach series, following cast members making their dreams come true with Disney Aspire, we’re thrilled to share Thomas’ story with you.

While attending Campbell High School nearly 46 years ago, Thomas realized that he had a love for technology and computers. Of course back then, computers were quite large and complicated, but that didn’t stop Thomas from taking them apart, fixing them and putting them back together again. He always wanted to go to college to pursue computer science, but instead took a job at the Pearl Harbor Naval Shipyard, which is one of four shipyards operated by the United States Navy in Hawaii, and spent time raising his family.

After spending 33 years at the Pearl Harbor Naval Shipyard, the father of six, grandfather of fourteen and great-grandfather of two retired; but he quickly discovered that the retiree life just wasn’t for him. Thomas then joined the cast of Aulani before the grand opening in 2011 and is now the food purchaser for the entire resort.

While in his role at Aulani, Thomas always encouraged his family to pursue higher education – and it was a conversation with his granddaughter that turned his attention back to his own college dream.

“One day my granddaughter looked at me and asked ‘Grandpa, did you go to college?’ to which I replied ‘No, but I wanted to,’” said Thomas. “My grandchildren inspire me on a daily basis and I want to inspire them. So, when Disney announced the Aspire program, I was first in line to sign up.”

Now, Thomas is working through the “College Start Program” through Disney Aspire, which offers college credits while preparing students who have been out of school for a while get back into the rhythm of coursework. Once he completes this year-long online program, Thomas will be able to choose from a variety of college programs and work toward becoming the first of nine siblings in his family to earn a college degree.

“I am so thankful to Disney and Aulani for giving me access to a lifelong goal that I thought was out of reach,” said Thomas. “They have taken what used to be a dream and made it into a journey, which will soon be a reality. My greatest hope is to change lives, even just a few, as Disney has changed mine.”

Disney Aspire launched in 2018 to help hourly cast members reach their educational goals by equipping them with programs, coaching and job skills, with the cost of tuition and books covered by Disney. From professional skills to graduate degrees, cast members can pursue a variety of programs – they can even study English or Spanish through Rosetta Stone courses.

We’re so excited that Thomas is now able to take the next step on his journey to a college degree! Stay tuned for more inspiring stories of cast members achieving their goals with Disney Aspire, as we look forward to continuing our #DreamsWithinReach series.