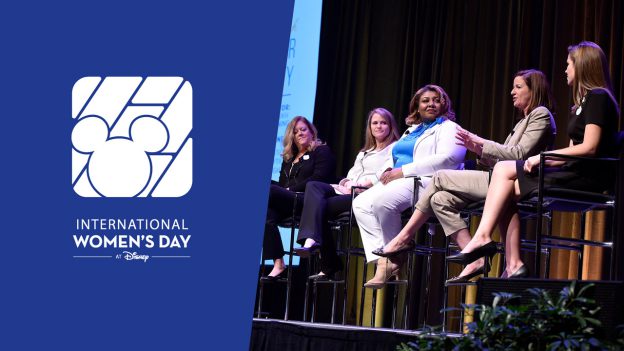 Around the world, our cast members embraced opportunities to hear and share their stories. These events, which were spearheaded by the Women’s Inclusion Network at Disney Parks, Experiences and Products, continue Disney’s commitment to empowering our cast – ensuring that every cast member feels like they belong, their voices are heard, and their efforts are valued. From speaker panels to networking opportunities, wellness and career resources sessions, our cast members were able to come together for valuable conversations that allow us to inspire each other and continue to create magical memories for our guests each and every day.

We’re so thrilled our cast members were able to celebrate in so many different ways, and can’t wait to introduce you to some of the incredible #WomenBehindtheMagic when our new series debuts later this month!

Let’s take a trip around the world to see how cast members came together to celebrate International Women’s Day.

Over in Glendale, attendees were able to hear from Disney leaders—from Imagineers to product experts—during a number of empowering panels focused on the key themes of “Belong, Unite, and Inspire; Empowering the Workforce; and Sharing Our Stories.”

Cast members at the Walt Disney World Resort took part in a series of programs on mentoring, women in STEM, and more, all kicked off by president of the resort, George A. Kalogridis.

Disneyland Paris had a packed itinerary, including remarks from new resort president Natacha Rafalski. The resort even hosted about 100 women for career workshops with Disneyland Paris leaders.

Shanghai Disney Resort held a two-week celebration with daily special activities for cast members and guests, including speaker sessions, social media fun with Minnie Mouse and her friends and a “Tell Your Story” series featuring cast members, all leading up to an inspiring conference on International Women’s Day kicked off by the resort’s general manager Joe Schott.

Hong Kong Disneyland hosted a number of cast member activities including a speaker series and highlights of fantastic female chefs at the resort, as well as a conversation with champion for women’s empowerment, actress Geena Davis and managing director of the resort, Stephanie Young.

Stay tuned later this month for the debut of our new #WomenBehindtheMagic series, showcasing our amazing cast!