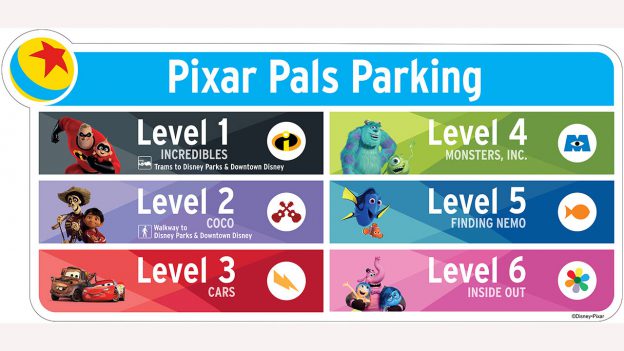 Earlier this year, we shared news about Project Stardust—which includes a number of enhancements we’re making to the Disneyland Resort, specifically Disneyland park, to continue to deliver a world-class guest experience. While carrying forward Walt Disney’s original vision, the improvements range from beautification to maxi­mizing guest comfort and improving guest flow, as we prepare the theme park for its next phase of significant growth, starting with Star Wars: Galaxy’s Edge.

We also are adding more parking and enhancing the guest arrival experience. Last year, we announced plans to build another parking structure adjacent to Mickey & Friends. The new structure will be called Pixar Pals, featuring familiar friends from Disney•Pixar films such as “Coco,” “Monsters, Inc.” and “Inside Out”!

More than 5,000 parking spaces will be available within the structure. We anticipate it opening no later than the end of July, and hopefully sooner. The new structure will feature a new electronic parking system to expedite guest parking.

We completed many of the improvements to guest flow and queuing that we shared in an earlier blog post, including the curb grading in Town Square. Work has now begun to open up the walkways in the central Plaza, sometimes referred to as the “hub,” while retaining the intimate feel at the heart of Disneyland park. In addition to enhancing curbs with slow inclines, we are softening corners on planters to help guests navigate around them.

We also will be working on the entrance and marquee to Adventureland as part of Project Stardust. We will temporarily take the marquee down to remove support for ease of guest flow. Other Project Stardust enhancements include policy updates in an effort to make the theme park experience more enjoyable for guests. Earlier today, the Disney Parks Moms Panel shared more about those updates here.

When Project Stardust is complete, Disneyland park will remain the beloved icon and international treasure it is today, while preparing the Disneyland Resort for generations of future guests.