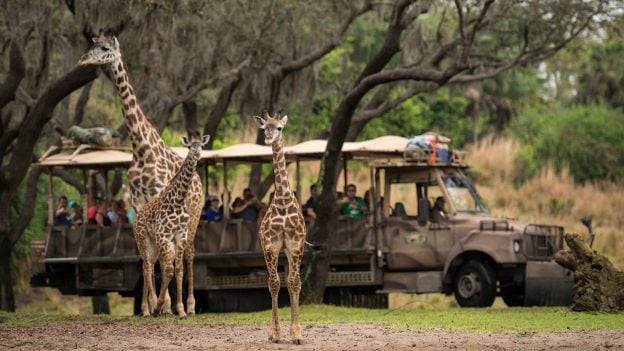 Can you spot our latest addition to the Kilimanjaro Safari savanna? He has a heart-shape on his neck and is so very close to celebrating his two-month birthday.

Ever since his birth on the savanna at Disney’s Animal Kingdom on Jan. 14, our male Masai giraffe calf has been bold, curious and courageous… and to celebrate his spirit, he has been given a very special name – Jabari, which means “brave one” in Swahili.

Now standing at seven-feet-tall, Jabari has spent the past few months bonding with his mom Mara in a backstage habitat. True to his name, Jabari has quickly reached all his key developmental milestones, so today he is returning to Kilimanjaro Safari savanna to officially join the rest of the giraffe herd.

Here’s a look at Jabari’s debut.

Our animal care team typically is given the honor of naming baby animals but this time the naming choice went to our safari drivers because they played such an important role in keeping guests calm during Jabari’s birth. Several of the drivers were on hand this morning to see Jabari in stride, which left them smiling and beaming with pride.

Jabari’s parents, Mara and George, were chosen to breed through the Species Survival Plan (SSP), which is overseen by the Association of Zoos and Aquariums and ensures responsible breeding  of threatened and endangered species, thereby ensuring healthy, future generations. Jabari is following in the of his sisters Amira and Aella, two young female giraffe calves who were born at Disney’s Kingdom last year.

The Masai giraffe, found primarily in Kenya and Tanzania, is one of nine types of giraffe and is a vulnerable species. There are believed to be roughly 32,000 Masai giraffes left in the wild, and their population continues to decline due in part to poaching and habitat loss.

In our next Wildlife Wednesday, we’ll highlight some of our giraffe conservation efforts in Africa.