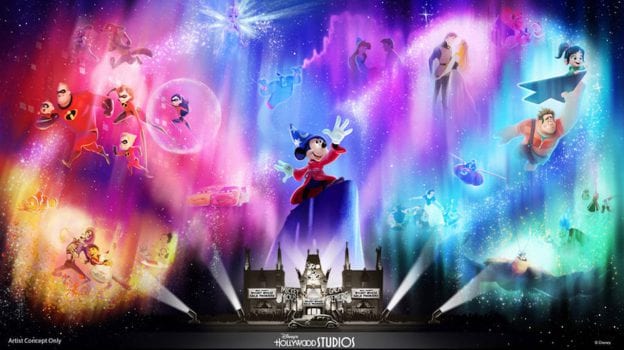 “Wonderful World of Animation,” the all-new cinematic nighttime experience debuting May 1 at Disney’s Hollywood Studios, leverages state-of-the-art projection mapping technology and other effects to take guests on a magical journey through more than 90 years of Disney animation.

The team at Disney Parks Live Entertainment has been working on the show for months and are now in the final stages of programming and preparation. Over the last couple weeks, the production team and creative designers, representing audio, video, lighting, music and special effects disciplines, have gone in after the park is closed for the day, fine-tuning everything to get it just right for the grand opening. Here’s a look behind the scenes.

“Wonderful World of Animation” begins with the one-and-only Mickey Mouse, celebrating his starring role in “Fantasia” before launching into other sequences filled with magic, family, adventure, romance, villainy and friendship. Each theme is brought to life through unforgettable moments from Disney and Pixar animated films, from “Coco” and “The Incredibles” to “Sleeping Beauty” and “Ralph Breaks the Internet.”

With nods to the vast library from Disney and Pixar Animation Studios’ long legacy, “Wonderful World of Animation” is the perfect complement to an exhilarating day of adventures at Disney’s Hollywood Studios and a great way to celebrate the park’s 30th anniversary.