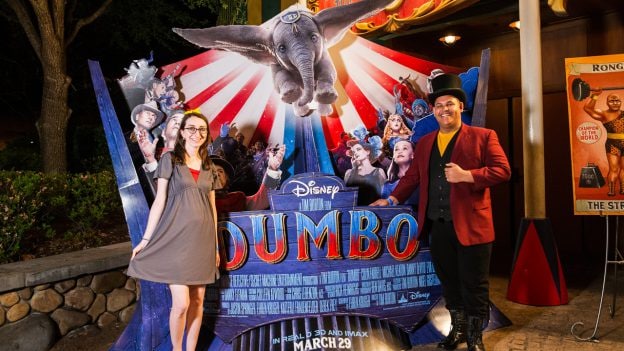 Disney’s “Dumbo” debuted in theaters on Friday, but last Sunday, 250 Disney Parks Blog readers got an early look with a special advance screening and an amazing after party inside Fantasyland at Magic Kingdom Park.

Readers kicked off the evening in style at AMC Disney Springs 24, with many donning Dumbo-themed outfits. Some even pieced together their own fashionable creations!

After enjoying an early screening of the film, the group headed to Fantasyland at Magic Kingdom Park, where the group was treated to circus-themed desserts. Jugglers, stilt walkers, clowns and more were on hand to entertain the group and our guests were also given the opportunity to enjoy the park’s Dumbo the Flying Elephant attraction.

Check out the video below for a look inside the event and to hear what our guests are saying about the film.

From Disney and visionary director Tim Burton, the grand live-action adventure “Dumbo” expands on the beloved classic story where differences are celebrated, family is cherished and dreams take flight. Circus owner Max Medici (Danny DeVito) enlists former star Holt Farrier (Colin Farrell) and his children Milly (Nico Parker) and Joe (Finley Hobbins) to care for a newborn elephant whose oversized ears make him a laughingstock in an already struggling circus. But when they discover that Dumbo can fly, the circus makes an incredible comeback, attracting persuasive entrepreneur V.A. Vandevere (Michael Keaton), who recruits the peculiar pachyderm for his newest, larger-than-life entertainment venture, Dreamland. Dumbo soars to new heights alongside a charming and spectacular aerial artist, Colette Marchant (Eva Green), until Holt learns that beneath its shiny veneer, Dreamland is full of dark secrets.

Disney’s “Dumbo” is in theaters now!