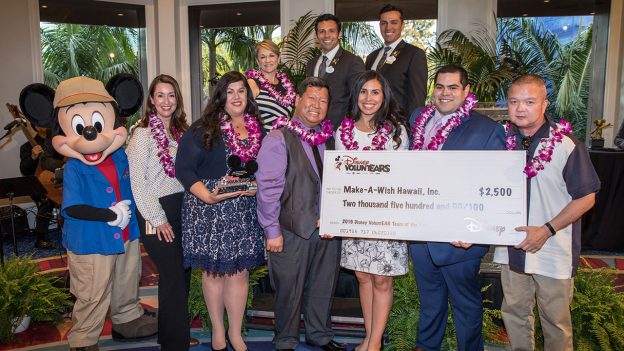 VoluntEAR of the Year: Craig Kawamoto

Chances are, cast members who volunteer regularly know Craig Kawamoto. While shifts at the Orange County Food Bank are his favorite, he also supports the resort’s military care package drives, Walk the Farm charity walk at Tanaka Farms in Irvine and much more. In his role at the Walt Disney Travel Company, he champions volunteerism by leading team building events and motivating his colleagues to get involved.

“Seeing so many of my direct reports get involved with VoluntEARing efforts has been wonderful,” said Craig. “I definitely wanted to be someone who ‘walked the talk.’ Being able to inspire others to volunteer has been very personally rewarding.”

“We celebrate each other’s victories and encourage the concept of ʻohana,’” said team member Alondra Preciado. A favorite memory from an Orange County Food Bank event represents the team’s giving spirit. “We had a wonderful turnout of 11 Aulani participants to help pack food boxes, and with that high number, we were able to have our own dedicated production line.”

When Mila, the daughter of cast members Melinda and Cory Lawless, turned 5 years old, volunteering became a family affair. The three, joined by Melinda’s sister, Melissa Vince (also a cast member), volunteer as a family throughout the year. The family can be found volunteering at events like Relay for Life, CHOC Walk in the Park, Toys for Tots drives and the Orange County Food Bank.

“We’re fortunate to work at The Happiest Place on Earth, and if we can spread some of that happiness around by volunteering in our community, we want to take the opportunities we’re given to brighten someone else’s life,” said Melinda, who was particularly touched when Mila chose to highlight volunteering as part of a class assignment to create a poster about her favorite hobby. “She didn’t want to talk about being good at hula dancing or karate. She said, ‘I’m good at helping people; I want to put that.’ Her poster has a picture of her performing her cardboard duties at the Orange County Food Bank. It warmed my heart that volunteering was the first thing she thought of, and that she’s proud she helps others.”