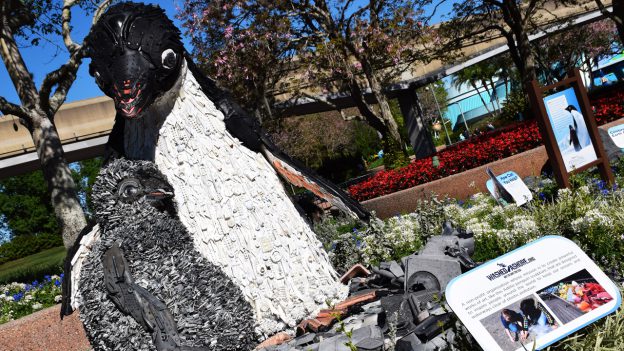 The Epcot International Flower & Garden Festival has returned for its 26th year of connecting guests to the magic of nature, with interactive gardens and exhibits bursting with the beauty of spring. If you’ve had a chance to visit, you may have noticed a special addition to this year’s displays – a giant penguin sculpture created out of marine debris celebrating the upcoming release of Disneynature Penguins.

The film, which opens April 17, is a coming-of-age story about an Adélie penguin named Steve who joins millions of fellow males in the icy Antarctic spring on a quest to build a suitable nest, find a life partner and start a family. None of it comes easily for him, especially considering he’s targeted by everything from killer whales to leopard seals, who unapologetically threaten his happily ever after.

The larger-than-life sculpture, located between The Land and The Seas with Nemo & Friends,  depicts an adult and baby Adélie penguin resting on a pebble nest. The installation is more than initially meets the eye – it’s made entirely out of recycled marine debris such as bottle caps, toothbrushes and even discarded toys, all recovered from oceans and waterways! The artwork was created by the nonprofit organization WashedAshore.org, whose mission is to produce powerful works of art that are designed to help inspire a global audience to keep oceans and waterways clear of plastic pollution. Epcot guests can start making a conservation impact of their own by pledging to reduce the amount of single-use plastics they use each day, choosing reusable bags and skipping the straw when consuming beverages.

Guests can also see another enormous penguin sculpture at Disney’s Animal Kingdom Park in celebration of Earth Month, April 1 – 30. For an exclusive peek into “Penguins,” download your free copy of the Disneynature “Penguins” Educator’s Guide and Activity Packet, available online at disney.com/nature.