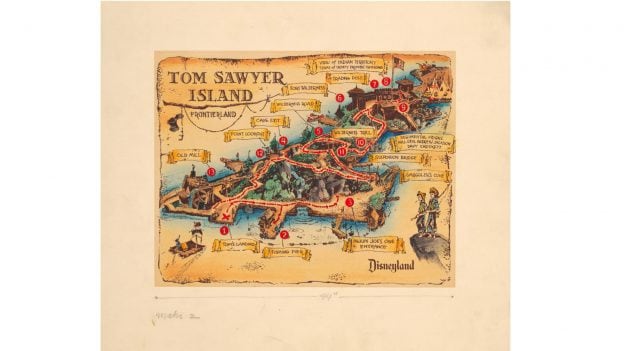 “Walt was brought up in Missouri—Mark Twain country,” Disneyland designer and Disney Legend Dick Irvine said, “and that island is all his. He didn’t let anybody help him design it.”

The Disney Parks all over the world still bear many personal marks of Walt Disney himself, and Tom Sawyer Island is perhaps one of the most personal, much of that having to do with Walt’s cherished childhood experiences during his early boyhood in Missouri.

“Those six years we spent [in Marceline, Missouri] were memorable years, and I think they played a big part in some of the corny gags I put into cartoons. In the early cartoons, I used to feature a little outhouse and I know darn well that I got that here in Marceline. It helped us in our early days. We got a lot of laughs with that outhouse.”

Beyond the cartoon medium, live action films such as “So Dear to My Heart” and “Summer Magic” carry a wistful Midwestern nostalgia, and Main Street, U.S.A. is an homage to that certain place and time in Walt’s identity and memory.

From Disneyland’s earliest concepts, dating back to the late-1940s plans for a park across the street from the Studio in Burbank, an island in the center of a mighty river was always present. The names and activities to be contained there shifted and evolved—from a “Mickey Mouse Island,” home base for the Mickey Mouse Club and the Mouseketeers, to a Storybook Land-like showcase for miniatures of historic American landmarks such as Independence Hall, Mount Vernon, and Monticello, to be viewed from the deck of the passing Mark Twain.

Walt decided that among the somewhat “passive” audience experiences within his Disneyland park, a place for self-guided exploration and spontaneous play might be just the thing for the island—and his Missouri-bred love for Mark Twain, and his heroes Tom Sawyer and Huckleberry Finn, provided a foundational story and theme.

Disney Legend Marvin Davis took a crack at the Tom Sawyer concept, but the boss was not satisfied with the work Davis produced, and the designer recalled that Walt barked, “Give me that thing,” and carried the plan sheet home. That night, in the red barn at his Carolwood Avenue home,  Walt worked for hours adding the elements he envisioned for Tom Sawyer island. Davis recalled that the next morning, Walt laid that plan, with his own vellum overlay, on Davis’s desk and proclaimed, “‘Now that’s the way it should be.’ The island was built according to Walt’s design.”

“I put in all the things I wanted to do as a kid—and couldn’t,” Walt said.

Like Tom Sawyer arriving to school, his namesake island was late, opening nearly a year after the debut of Disneyland, on June 16, 1956.  Naturally, when Magic Kingdom Park at Walt Disney World was designed, the popular Tom Sawyer Island was a part of the plan—and like the literary hero and its Disneyland precursor, was tardy to arrive, opening on May 20, 1973.

The experience of Tom Sawyer Island was, and remains, something like improvisational theatre. A richly-detailed setting and evidence of the elemental characters is provided, and the individual Guest can simply run free—imagining their own stories and scenarios relating to the characters and situations, or ignoring them entirely.

Part of the island’s charm is that it can only be accessed by raft, an homage to Huckleberry Finn’s famous water craft. After disembarking at Tom’s Landing, visitors can explore trails through the wilderness, cross a swaying suspension bridge or bouncing pontoon bridge, and explore the various rock formations and mysterious underground passageways. There are plenty of restful spots to soak up some sunshine, or rest in the shade, and enjoy peaceful waterside oases that hearken to a simpler place and time. Fans of Twain will find ample reminders of the great author’s creations, and the uninitiated will discover the rich heritage of the place.

“I’m a literary optimist,” says Vanessa Hunt of Walt Disney Imagineering. “I hold out hope that young people will spend time playing on Tom Sawyer Island, and be curious enough to look for the source stories and characters.”

When Tokyo Disneyland in Japan was created, Tom Sawyer Island was included. Although Disneyland Paris put Big Thunder Mountain on the central island in the Rivers of the Far West, the concept was transposed to Adventureland for Adventure Isle. Hong Kong Disneyland has a similar transposition with an island in the middle of the Rivers of Adventure. The island at the center of the mighty river in Treasure Cove at Shanghai Disneyland is currently and enticingly deserted.

Even now, more than six decades after its creation, this “uniquely Walt” idea continues to be re-created, re-imagined, and enjoyed daily by Disney Park Guests around the world—all in tribute to Walt’s homespun philosophy, born of his Missouri youth. “Why do we have to grow up?” Walt said. “I know more adults who have the children’s approach to life. They’re people who don’t give a hang what the Joneses do. You see them at Disneyland every time you go there. They are not afraid to be delighted with simple pleasures, and they have a degree of contentment with what life has brought …”

For more fascinating Disney history like this, check out the “Maps of Disney Parks” book.