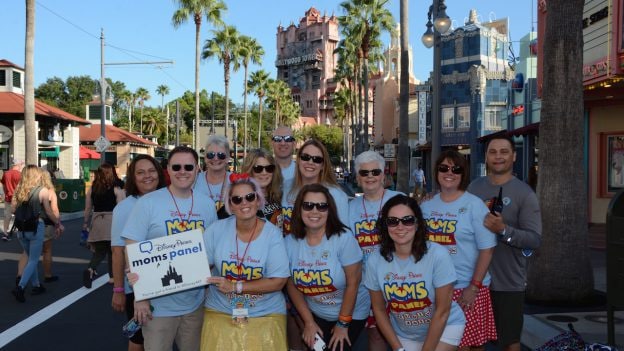 Note: Some blog posts were created prior to the change to planDisney and may still contain references to Disney Parks Moms Panel

Last month we highlighted some amazing photo spots at the Disneyland Resort, but this week it’s all about Walt Disney World Resort. Our panelists had numerous, fantastic suggestions, but we’ve narrowed it down to a few of our favorites. Get those cameras ready to say, “Mickey Mouse!”

First up, Sunset Boulevard at Disney’s Hollywood Studios. “We love taking photos on Sunset Boulevard,” exclaims Jessica. “The magnificent palm trees lining the street and the Hollywood Tower Hotel looming in the background make for a great family picture.”

Another top choice at Disney’s Hollywood Studios can be found in Toy Story Land. According to Korliss, who doesn’t love having a life-size “headshot” with Woody?

“After racking up points with Woody and his pals, you can find this mural as you exit Toy Story Mania. There usually isn’t a crowd waiting to get a photo with our favorite cowboy, so be camera ready as you exit the queue!”

Moving over to Epcot is where you will find Eean posing at her favorite photo locations.

“World Showcase is my favorite place in all of Walt Disney World.  Being a former teacher I love learning about different cultures. I’ve probably watched Impressions de France 15 times and it never gets old,” said Eean. “There’s also something to be said about being able to get authentic crepes, schnitzel, or baklava in a place that’s only a two-hour plane ride away. And one day I’m going to find a pearl in my oyster at the Mitsukohshi Department Store!”

At Disney’s Animal Kingdom is where you will find Jodie at her favorite photo spot. “The floating mountains and immersive theming in Pandora – The World of Avatar is unlike anything I’ve ever experienced at a theme park. It’s my family’s favorite new area to explore when visiting the Walt Disney World Resort!”

And the number one choice for many of our panelists was the iconic picture in front of Cinderella Castle in Magic Kingdom Park. “A shot in front of this iconic Disney landmark is a must-do for every Walt Disney World vacation,” says Ashley P. “It’s where the magic begins for each of our Disney vacations, and it’s where we say, ‘see ya real soon,’ when it’s time to head home.”

For more great tips on planning your next Walt Disney World vacation, or for general Disney vacation questions, visit DisneyParksMomsPanel.com for an answer from one of our panelists.

Panelists receive compensation for their participation on the Disney Parks Moms Panel.﻿