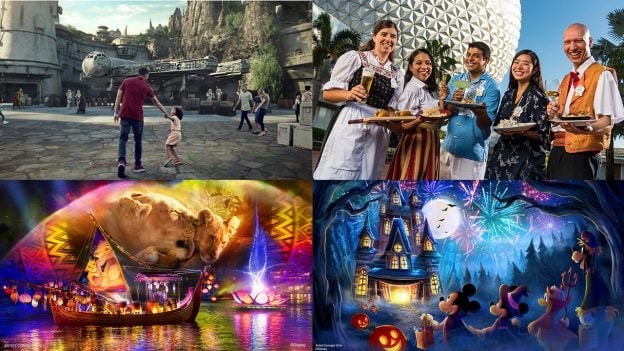 Spring is in full bloom, but I know many of you are dreaming up your plans for a visit to Walt Disney World Resort this fall. To help you plan a magical vacation, here are 9 great experiences you can have later this year.

Mickey’s Not-So-Scary Halloween Party will be held on 36 select nights from Aug. 16-Nov. 1. The specially ticketed event will include a new Halloween-themed nighttime show this year featuring state-of-the-art projection effects, lasers, lighting and dazzling fireworks that come together to tell a not-so-scary story about how anything can happen on Halloween night. The show will take you along for a trick-or-treating adventure, where four friends – Mickey Mouse, Minnie Mouse, Donald Duck and Goofy – find themselves drawn into a mysterious haunted house.

This Epcot celebration of cuisine, music and more takes place Aug. 29-Nov. 23 – a record 87 days. During this foodie festival, the park will brim with marketplaces, culinary demonstrations, beverage seminars, the Eat to the Beat Concert Series, specialty merchandise and much more.

For nearly 20 years, “IllumiNations: Reflections of Earth” has entertained millions as the nighttime spectacular that brought each day at Epcot to a thrilling close. Guests have marveled as World Showcase lagoon came to life with fireworks, fountains and lasers paying homage to the joyful story of humanity and the remarkable achievements of our time. The show’s final night will be Sept. 30, to make way for an all-new, limited-time spectacular, “Epcot Forever,” debuting Oct. 1. This new show will be a celebration of the past, present and future of Epcot featuring fireworks, lasers and choreographed special-effect kites accompanied by a stirring collection of songs celebrating Epcot.

4. Bounce into Fall at Disney Springs with NBA Experience and Special Seasonal Offerings

Basketball is officially “in season” this fall, after NBA Experience holds a championship-worthy grand opening Aug. 12 at Disney Springs. When you step into this re-creation of a modern NBA arena, you’ll feel what it’s like to be a basketball superstar through 13 unique interactive and hands-on experiences where Disney magic merges with the thrills of the NBA and WNBA.

The fall season is also a great time to enjoy entertainment and shopping at Disney Springs. Colorful backdrops will make great seasonal photos for your entire family, while new fall looks will be available in shops, including Halloween costumes for kids and clothing for adults featuring their favorite Disney characters.

On the heels of its Aug. 29 grand opening, Star Wars: Galaxy’s Edge at Disney’s Hollywood Studios gives you the chance this fall to live your own Star Wars stories. While visiting the land, you can stop for a drink at Oga’s Cantina or discover rare artifacts at Dok-Ondar’s Den of Antiquities, among other immersive experiences. The groundbreaking attraction Millennium Falcon: Smugglers Run gives you control of the iconic spacecraft as the ship hurtles through space on a smuggling mission.

Star Wars: Galaxy’s Edge and its experiences are subject to capacity.

A new mode of transportation will float through the air around Walt Disney World this fall when Disney Skyliner, a state-of-the-art gondola system, begins gliding across the sky. Disney Skyliner will conveniently connect Disney’s Hollywood Studios and Epcot to four resort hotels – Disney’s Art of Animation Resort, Disney’s Pop Century Resort and Disney’s Caribbean Beach Resort, as well as the 15th Disney Vacation Club property, Disney’s Riviera Resort (planned to open in mid-December). Select gondolas will have iconic Disney characters incorporated into their exterior designs to give the appearance that a Disney pal is riding along with you. Disney Skyliner will offer a new way to experience Walt Disney World with amazing views only available from the sky.

As the sun sets earlier and earlier this fall, “Rivers of Light: We Are One” will come to life on Discovery River in Disney’s Animal Kingdom. This nighttime show includes dramatic new imagery and familiar animal characters from Disneynature films along with a colorful tapestry of unforgettable moments from Disney animation.

To welcome fall travelers, there’s always something new at Disney resort hotels. Disney’s Coronado Springs Resort will greet you with its new 15-story Gran Destino tower (opening this summer), adding 500-plus guestrooms – including suites and concierge-level services – and crowned by a rooftop restaurant. New waterfront dining and a retail shopping area have come to Disney’s Caribbean Beach Resort, while a mid-December opening is planned for Disney’s Riviera Resort, a Disney Vacation Club property inspired by the grandeur and enchantment of the European Riviera.

This fall’s runDisney race season is a delectable celebration 10 years in the making as the 2019 Disney Wine & Dine Half Marathon Weekend takes place Oct. 31-Nov. 3. Filled with a delicious slate of events and Disney magic along every mile, this year’s event includes a 5K, 10K, half marathon and kids’ races. During this year’s Disney Fall Feast 5K, you can run, jog or walk your way around Epcot for the first time during this fall event. At the Nov. 3 post-race party, enjoy after-hours access to the Epcot International Food & Wine Festival, including marketplaces and select Epcot attractions. For all race-season details, visit runDisney.com. You can also register via the celebrated charity for this year’s event, Second Harvest Food Bank of Central Florida.