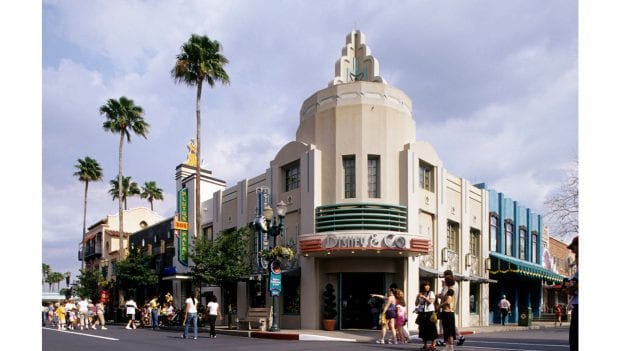 Thirty years ago, the glamorous entry to an all-new Disney park “…dedicated to Hollywood,” as the opening day plaque reads, “not a place on a map, but a state of mind that exists wherever people dream and wonder and imagine, a place where illusion and reality are fused by technological magic” was represented by a bustling city street of stores and services, “a Hollywood that never was—and always will be,” as the dedication concluded. This was (and is) Hollywood Boulevard.

Debuting on May 1, 1989, Disney’s Hollywood Studios (originally Disney-MGM Studios) was the third theme park to open at Walt Disney World (after the Magic Kingdom in 1971 and Epcot in 1982). Originating in a concept for an entertainment-themed Epcot pavilion, the idea was expanded into its own park, which now occupies more than 135 acres.

“Hollywood is certainly a place,” says Martin Turnbull, author of the Garden of Allah series of Hollywood historical novels, “but to a worldwide audience, in many ways it is a shared historical fantasy. It’s based in reality, but we have romanticized it into what we want it to be, and need it to represent.”

The Disney Imagineers relied on those ideas—both history and cultural memory—in their design approach to Hollywood Boulevard. “The entry to the park itself is a kind of ‘Main Street, USA’ of early 20th Century Southern California,” says Vanessa Hunt, co-author of Poster Art of the Disney Parks. “It evokes the era and the locale skillfully, just as Main Street evokes the turn of the century hometown America.”

Most guests will likely never know the specific buildings being represented, but it’s a loving and remarkable gallery of historic architecture. The park gateway, for instance, is based on the 1935 Streamline Moderne Pan Pacific Auditorium façade in Los Angeles, and the entry plaza souvenir and information building is a reproduction of the 1936 Hollywood historic landmark Crossroads of the World.

Like a beloved movie you’ve seen a dozen times and would still watch a dozen more times, every visit to Disney’s Hollywood Studios can reveal more fascinating detail, another layer of sophisticated storytelling, and the pure pleasure of discovery.

In a future post, a right turn off of Hollywood Boulevard will take us on an exploration of more Tinseltown history, on Sunset Boulevard at Disney’s Hollywood Studios.