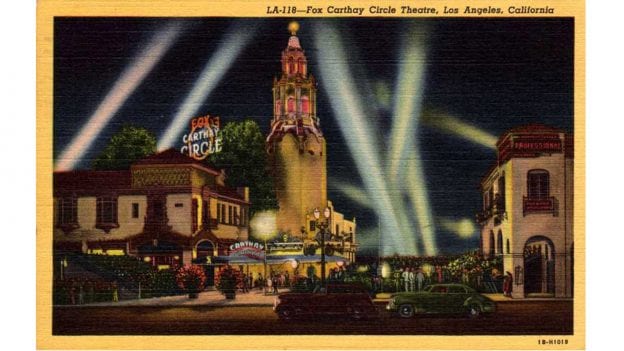 In a recent Disney Parks Blog post, the inspirations for the architectural glamour at Disney’s Hollywood Studios were highlighted.

Twenty-five years ago, five years after opening day, as the park expanded with the addition of The Twilight Zone Tower of Terror, a new avenue of Southern California history, Sunset Boulevard, was created to address the growth.

Interestingly, despite that name, most of the structures are from nowhere near the real Sunset Boulevard, with design exemplars from Pasadena, Inglewood, Beverly Hills, and even Riverside sharing street frontage.

Mouse About Town is an exception. It represents the Berman/Kohner Building at 9165-1969 Sunset Boulevard. This Streamline Moderne style building from the 1930s housed Berman Furs and Hollywood talent agent Paul Kohner.

The Sunset Ranch Market recalls the famous Los Angeles Farmers Market, located at Third & Fairfax since 1934. Originally just produce trucks and wagons in an otherwise empty field, in 1941 a few simple buildings were added, along with the clock tower that has become the Market’s icon. Today it is a “town center” for its area, and a beloved tourist destination.

Farther down Sunset is the familiar tower of the 1926 Carthay Circle Theater. The historic movie theater at 6316 San Vicente Boulevard in Los Angeles hosted premieres of “Snow White and the Seven Dwarfs” (1937) and “Fantasia” (1940), and was sadly demolished in 1969. A larger and more elaborate Carthay Circle is now the icon at the end of Buena Vista Street inside Disney California Adventure park.

Reel Vogue may have the most obscure and interesting inspirational source, the façade of the 1940 Pasadena Winter Garden on Arroyo Parkway, designed by Pasadena architect Cyril Bennett. Now a nondescript storage facility, it was probably most famous as “home ice” of World and Olympic champion Peggy Fleming.

Together with Hollywood Boulevard, this enchanting and nostalgic street represents both a fantasy and a reality, a tangible microcosm of a brief and peculiar lifestyle that was pure Southern California.