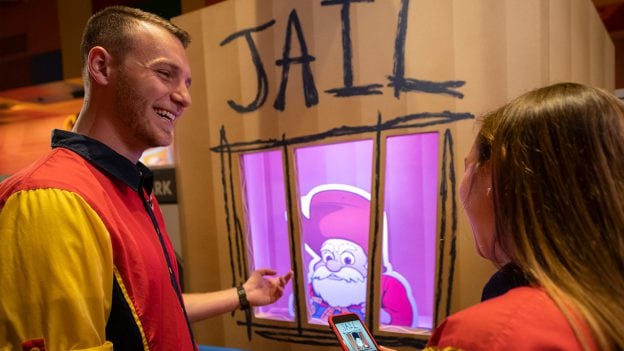 The Play Disney Parks app allows guests visiting Walt Disney World Resort and the Disneyland Resort to interact with the theme parks in a whole new way through themed games, Disney trivia, digital achievements, official Disney Parks music playlists through Apple Music® and more. And if you haven’t already downloaded the app, it’s available through the App Store and Google Play and has a new feature that’s worth checking out.

With this new feature, guests can bring to life an interactive show effect when enjoying the app in Toy Story Land at Disney’s Hollywood Studios. Stinky Pete, from Disney and Pixar’s “Toy Story 2,” is outta his box and joining some favorite pals in the Toy Story Mania! queue.

Be on the lookout for The Old Prospector while playing “Playset Party” – one of several in-queue games offered in the Play Disney Parks app – in which guests progress through a series of mini-games to help assemble the Toy Story Mania! playset. After completing all the mini-games, he may just pop out and surprise you! Hint: keep your eyes open near the end of the queue for a wild west-style jail cell that Andy has constructed.

Throughout Toy Story Land, the app also offers guests access to themed trivia,  a special music playlist featuring songs inspired by Pixar films, and tons of fun with “Andy’s Board Game Blast,” a game themed to Slinky Dog Dash that can be played anywhere at Disney Hollywood Studios!

Be sure to catch a glimpse of Stinky Pete’s new appearance and experience the many exciting additions coming to the app at both Walt Disney World Resort and Disneyland Resort!