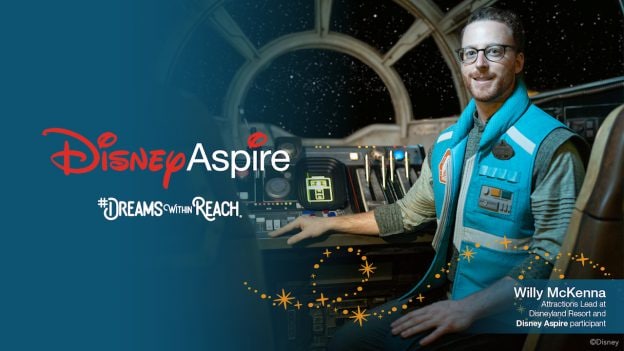 Dreams Within Reach: Disneyland Cast Member Reaches For The Stars with the Disney Aspire Program

Star Wars: Galaxy’s Edge Attractions Lead Willy McKenna discovered his educational goals are in a galaxy not-so-far away thanks to Disney Aspire, the 100 percent tuition-paid education program for eligible cast members. Disney Aspire is part of The Walt Disney Company’s commitment to supporting the dreams of its cast members, and for Willy, that dream is a Master’s degree.

We’re excited to share Willy’s inspiring journey with you in this installment of our #DreamsWithinReach series, which follows cast members making their dreams a reality through Disney Aspire.

Long before Willy began creating magical memories for guests as a Disneyland Resort cast member, he was making special Disney memories of his own. Willy grew up spending family vacations at Walt Disney World Resort and visited Disneyland Resort for the first time during the 50th anniversary. While studying business administration at Saint Louis University, Willy began his career with The Walt Disney Company after being invited to participate in the Disney College Program at the Walt Disney World Resort. After graduating with his undergraduate degree, he moved across the country to work at Elias & Co. in Disney California Adventure Park. Here, Willy discovered Disney Aspire and made the decision to follow in his family’s footsteps and continue his educational pursuits.

“Both of my parents have Master’s degrees, and my sister is finishing hers, so education has always been very important in my family,” shared Willy. “I decided to pursue my Master’s in organizational leadership through Disney Aspire with the goal to open more doors with Disney.”

Now, as part of the test and adjust team at the new, highly anticipated Star Wars: Galaxy’s Edge, Willy looks forward to the endless opportunities ahead while reflecting on what the program means to him.

“It means everything to me,” said Willy. “I already had a lot of respect for the company, but the fact that Disney is willing to put out the money, effort and time to invest in me means the world – even the galaxy!”

Since launching in 2018, Disney Aspire continues to help hourly cast members achieve their long-term educational goals. Whether cast pursue professional skills or graduate degrees – they can do so from an ever-increasing network of schools that now includes University of Central Florida for eligible Florida cast members and master’s degree programs from the University of Florida Online for all eligible cast members. Disney Aspire connects cast members with access to programs, coaching, and job skills, while cost of tuition is paid upfront at in-network schools and application fees, books and course materials are reimbursed by Disney.

We’re happy Willy is well on his way to obtaining his Master’s degree! As cast members like Willy pursue their goals with Disney Aspire, we’re excited to continue to share more motivating stories through our #DreamsWithinReach series.

Learn more about the program and apply by visiting aspire.disney.com.

Topics: Dreams Within Reach: Disneyland Cast Member Reaches For The Stars with the Disney Aspire Program