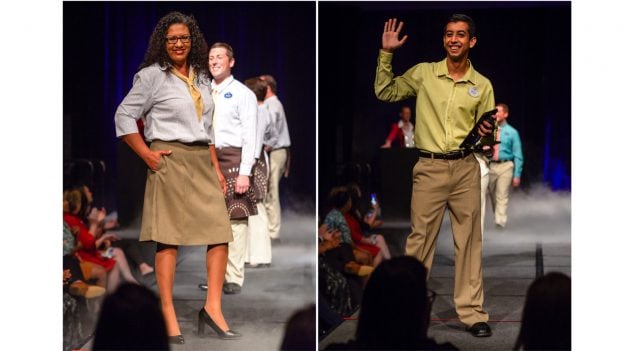 As we approach July’s opening of Gran Destino Tower as part of the exciting reimagining of Disney’s Coronado Springs Resort, we thought Disney Parks Blog readers would like a first peek at some of the stunning new Disney cast costumes created to complement the Resort’s reimagined design.

The new costumes were just revealed at a special cast member runway-style fashion show at Disney’s Coronado Springs Resort.  And as you can see, the brilliantly-colored costumes tie together the resort’s classic Spanish influences and imaginative Disney touches.

For the collection, Costume Designer Josh Winchester worked closely with Executive Architect David Stofcik and the Walt Disney Imagineering team to bring the story and setting of Gran Destino Tower to life in each garment. Josh looked to the works of Spanish artists for an earthy color palette, bold patterns and beautiful textures.

Not only do the new costumes transport Disney cast members back to the daring age of the great Spanish explorers, artists, writers and architects, but the timeless designs also take modern day function into account.   There are also customizable costume options, including a “mix and match” collection of pieces for some resort areas.

It won’t be long before you’ll be seeing these costumes at Disney’s Coronado Springs Resort.  Let us know what you think!

Also, check out our earlier Gran Destino Tower story for more details and information on booking a reservation.