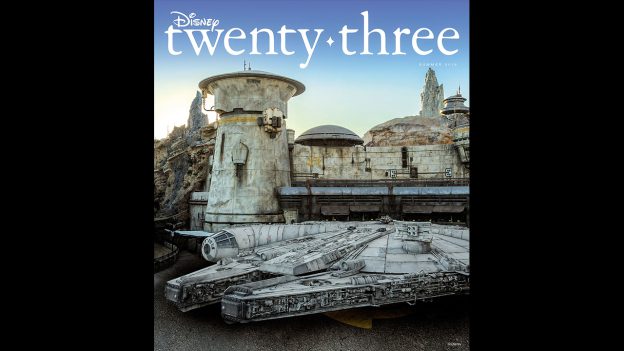 In just a few weeks, Star Wars: Galaxy’s Edge will welcome its first visitors at the Disneyland Resort. To honor that momentous occasion, D23: The Official Disney Fan Club is celebrating in the summer issue of Disney twenty-three, its quarterly publication. While the magazine is only available to D23 Gold Members, we wanted to give Disney Parks Blog readers a first look at the new issue—and what’s inside.

The exclusive photos were so breathtaking that D23 expanded this issue to showcase even more of the Black Spire Outpost, with three rich stories that feature exclusive interviews with the Imagineers behind the epic project. Readers will explore the two groundbreaking attractions in “Shift Your Setting to Thrill!” and get swept up in the immersive environments and new technologies in “Living on the Edge.”

And the spread featured here is from the story “A Galaxy Not So Far Away,” which gives guests the lay of the 14-acre land, along with a guided tour courtesy of Walt Disney Imagineering Creative Executive Scott Trowbridge.

Look for more behind-the-scenes exclusives at D23.com leading up to the opening of Star Wars: Galaxy’s Edge in the coming weeks.