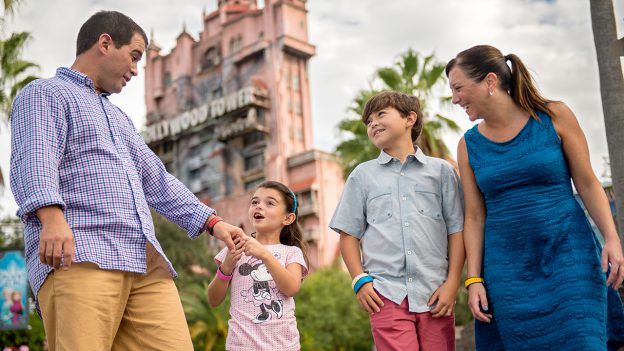 As we celebrate 30 years of Disney’s Hollywood Studios, members of the Disney Parks Moms Panel are also remembering some of their most magical memories created at the theme park.

“As someone that’s constantly on the lookout for adventure, I’ve always had the best time finding my thrills at Disney’s Hollywood Studios!” exclaims Wyatt. “Whether I’m rocking out to attractions such as Rock ‘n’ Roller Coaster Starring Aerosmith, or experiencing all-new excitement such as the toy-normous fun of riding Slinky Dog Dash for the first time, I know that I can count on Disney’s Hollywood Studios for larger-than-life entertainment each time I visit!”

Wyatt is not alone when he considers the park one full of amazing attractions. For Sue, it’s all about The Twilight Zone Tower of Terror.

“There’s the anticipation of walking down Sunset Boulevard, and seeing The Hollywood Tower Hotel in the distance – and the fear increases as we hear those screams. Once seated in the elevator, I never know whether to laugh hysterically or scream, as I just don’t know if I’m going up or down at any moment! I so enjoy that it is different every single time.”

For others, Disney’s Hollywood Studios means memories of live action shows and perhaps even the chance to be a part of the act.

“What sets Disney’s Hollywood Studios apart for me and my family are the chances to step into the story. From the audience participation at Indiana Jones Epic Stunt Spectacular! to the hilarious antics of the Citizens of Hollywood,” Missy explains. “I will never forget my husband’s first visit when he got called out of the audience to become part of the Citizens of Hollywood show. They ended up playing a prank on him, and we all laughed for days about it! My kiddos will always remember the trip too, where they had our whole family involved in recording a commercial. It’s these kinds of impromptu surprises that create memories we’ll cherish forever.”

And let’s not forget about memorable snack times!

“My absolute favorite spot in Disney’s Hollywood Studios is BaseLine Tap House! It is the perfect location to take a midday break,” explains Tabitha. “There is air-conditioned seating inside, as well as shaded seating outside, with snacks the kids enjoy and cold adult beverages for mom and dad. Some of my favorite memories include my family sitting down and talking about the special moments we have experienced on our vacation.”

For more great tips on preparing for your next visit to Disney’s Hollywood Studios or for general Disney vacation questions, visit DisneyParksMomsPanel.com for an answer from one of our panelists.

Panelists receive compensation for their participation on the Disney Parks Moms Panel.