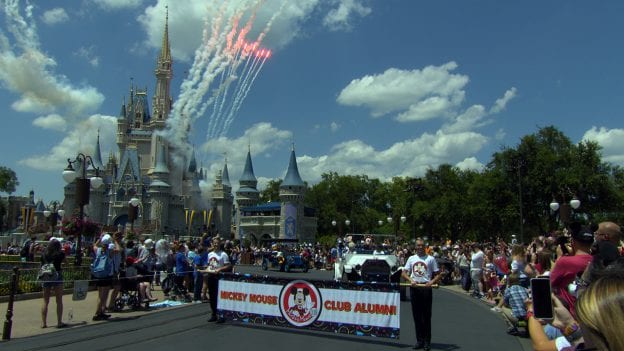 Today, Mouseketeers from all seven seasons of “The ‘All New’ Mickey Mouse Club” were cheered by guests at Magic Kingdom Park during a special pre-parade appearance on Main Street U.S.A.

The Mouseketeers are celebrating the 30th anniversary of the debut episode of “The ‘All New’ Mickey Mouse Club” on the Disney Channel. And today’s pre-parade moment kicked off a weekend reunion celebration for Mouseketeers and fans!

“The ‘All New’ Mickey Mouse Club” premiered on the Disney Channel in 1989, and Mouseketeers were on-hand to open Disney’s Hollywood Studios (Disney-MGM Studios) where all seasons were taped. The show led to an unprecedented wave of critically acclaimed and award-winning performances in theater, film, and television.

The 30th anniversary celebration and cast reunion continues this weekend with other events, including a 90s-themed party in World Showplace at Epcot on Saturday. The event, hosted by Joey Fatone, will feature dinner, musical performances, nostalgia, fireworks and more.

For more information about the Epcot event and reunion, visit MickeyMouseClubReunion.com.