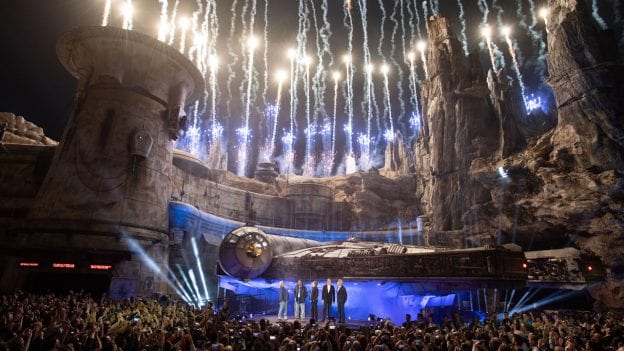 To dedicate Star Wars: Galaxy’s Edge, Disney Chairman and CEO Bob Iger was joined in front of the Millennium Falcon by Star Wars icons including George Lucas, Harrison Ford, Mark Hamill and Billy Dee Williams. And during the historic ceremony – which was set to the John Williams score composed especially for the land – the fastest hunk of junk in the galaxy (the Millennium Falcon) roared to life!

If you missed our Star Wars: Galaxy’s Edge #DisneyParksLIVE stream sponsored by AT&T, you can still watch the entire dedication ceremony now.

As regular readers know, when Star Wars: Galaxy’s Edge opens to the public at Disneyland Resort on May 31 and at Walt Disney World Resort on Aug. 29, guests will be able to take the controls of the most famous ship in the galaxy aboard Millennium Falcon: Smugglers Run. Before the historic dedication ceremony, Williams, Lucas, Ford and Hamill visited Disneyland Park and posed in front of the Millennium Falcon.

There’s much more to learn about Star Wars: Galaxy’s Edge on our special Star Wars at Disney Parks page. And our exclusive Disney Parks Blog “Building Batuu” series and “Know Before You Go” series will have you ready for your first visit!