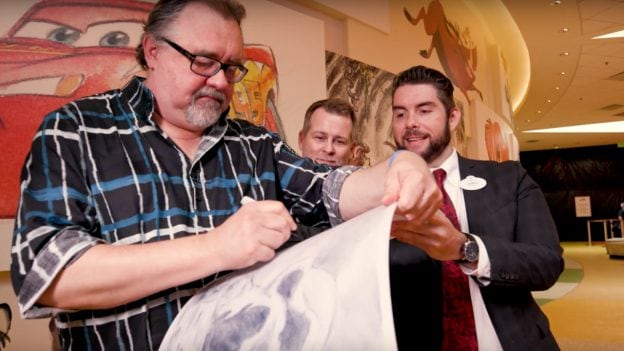 Further exploring “the birth of the king” is a companion piece I filmed with Don at Walt Disney World Resort for future distribution through Disney Files On Demand (a series of filmed Disney-newsmaker interviews available for viewing anytime online at disneyvacationclub.com/disneyfiles). As the fitting setting of our interview was “The Lion King” courtyard at Disney’s Art of Animation Resort, we had a great opportunity to renew one of the resort’s most “illuminating” traditions.

Among the most distinctive details of the resort’s lobby is a striking chandelier comprised of translucent panels emblazoned with art from storyboards that guided the development of Disney and Pixar films celebrated at the sprawling property. Take a closer look at those panels, and you may notice that several have been signed by filmmakers and voice actors whose films are represented in the fanciful fixture.

Honored to continue the tradition, Don signed one of the chandelier’s panels during our visit, adding his personal touch to an elephant graveyard storyboard sketched by Disney Legend Burny Mattinson, Don’s longtime friend and the longest-serving employee in Disney history. (Burny, by the way, just made his Disney Vacation Club Member Cruise debut, sailing with Members from California to Canada aboard the Disney Wonder.)

Check out the footage of that signing moment here, and look for Don’s signed chandelier panel the next time you visit Disney’s Art of Animation Resort.