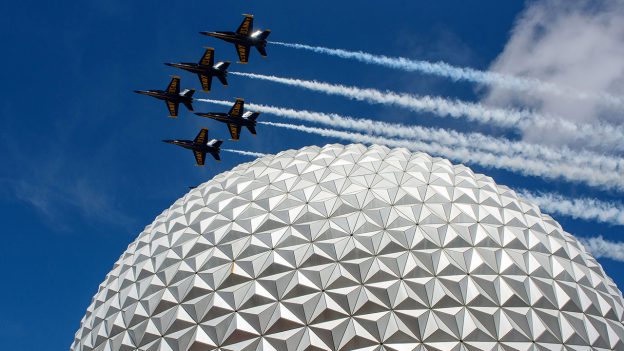 The Blue Angels executed two flyovers at 500 feet, roaring by at speeds of more than 250 mph.  During one of the passes, the pilots performed a perfect “Delta Break” maneuver above the Spaceship Earth.

Many guests at Epcot, which included visiting U.S.military personnel, veterans and their families, said it was a special experience watching some of the world’s best pilots in action during their Disney vacation. “I did two tours in Vietnam and I was on the USS Somers and to see them go right over Spaceship Earth and on the second pass, when they split up – it was awesome,” Epcot guest and Navy veteran James Fredricks said. “I can’t help myself from getting emotional about it.”

As many of our readers know, supporting the U.S. Armed Forces and celebrating their service has long been a Disney tradition. After today’s celebration at Epcot, the Blue Angels are traveling south – to the Fort Lauderdale Air Show in Florida.