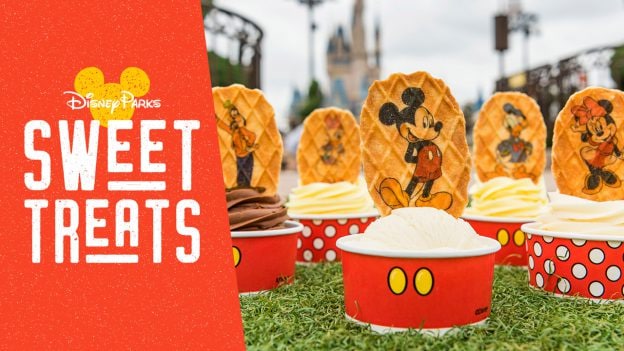 Do you have a hankerin’ for something sweet? This month’s Sweet Treats contains a few offerings that will definitely satisfy your sweet tooth. I’ve put together a list of a few new items from across Walt Disney World Resort that you’ll just HAVE to try!

Stop by the Electric Umbrella in Future World at Epcot to try this new brownie! The Cookie Crunch Brownie comes with chocolate ganache and chocolate cookie pieces.

Atop Disney’s Contemporary Resort, California Grill is serving up a new dessert! Just ask your waiter to see the Vegan and Vegetarian Menu, and you’ll find the Plant-based Cashew Cheesecake. This cake consists of coffee cashew cheesecake with Marcona almond crust, chocolate glaze, and fresh berries.

If you’re an Orange Bird fan, then you’ll have to head on over to The Artist’s Palette at Disney’s Saratoga Springs Resort & Spa! Available through June 12, this adorable vanilla cupcake consists of orange simple syrup, orange white chocolate mousse, and orange whipped cream topped with white crispy pearls, a chocolate beak, and green buttercream leaves. It also pairs nicely with the new Orange Vanilla Coke!

Starting in June, you’ll be able to find special waffle wafer toppers at various locations throughout the Magic Kingdom Park featuring some of your favorite Disney pals.

For more information on all of these offerings and locations, visit the Walt Disney World Resort website or call 407 WDW-DINE (407 939-3463).