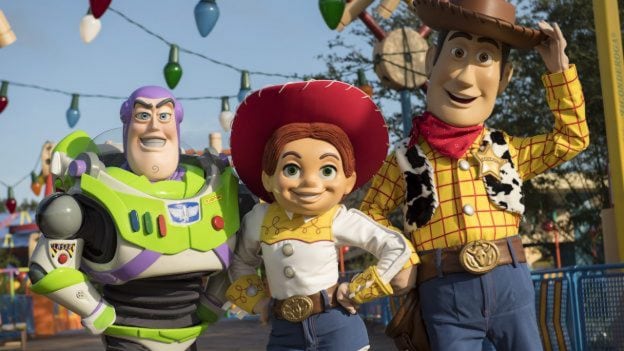 We’re kicking up our celebration for Disney and Pixar’s “Toy Story 4” right now before it hits theaters with new experiences and film-related merchandise at Disney’s Hollywood Studios. Today, we have a look at some favorites to help you take your park visit to Infinity and Beyond!

Did you see?  Bo Peep has arrived at Disney’s Hollywood Studios!

In “Toy Story 4,” Bonnie takes the toys on her family’s road trip and Woody ends up on an unexpected detour that includes a reunion with his long-lost friend Bo Peep.  Right now, guests have the opportunity to experience a surprise visit from Bo Peep at Toy Story Land.

While at Toy Story Land, you can find the Green Army Drum Corps, who march through the land several times a day, and the Green Army Patrol who will play “Sarge Says” and other interactive games.

And as regular readers know, new items inspired by the film’s adorable disposable spork named Forky include special plush, apparel and more (none of which is disposable)!

Forky is also included in the newest figure set featuring all your favorite characters from “Toy Story 4.”

During your visit to Disney’s Hollywood Studios, also be sure to see a preview of the film at Walt Disney Presents before it arrives in theaters on June 21.  Here’s the latest trailer: