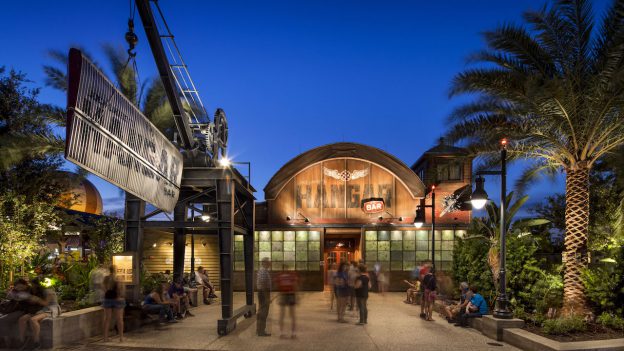 Jock Lindsey’s Hangar Bar will celebrate its 4th anniversary this fall and it continues to be one of my favorite watering holes at Disney Springs. If you haven’t been, there’s never a bad time to visit. Walt Disney Imagineers did an incredible job creating this 1940s-era plane hangar filled with themed décor from ceiling to floor all based around fictional character, Jock Lindsey.

Who is Jock Lindsey you ask? You’ll spot him in the film “Raiders of the Lost Ark” portrayed by Fred Sorenson who’s an actual airline pilot. Although Fred only appeared in the film for about a minute, his character inspired Imagineers to develop a whole lounge and menu dedicated to his global adventures with Indiana Jones.

When I heard Fred was planning to spend his 70th birthday at Jock Lindsey’s Hangar Bar, I just had to meet the man who inspired one of my favorite spots at Disney Springs. I had the pleasure to chat with Fred this past weekend and ask him a few questions about his career and his thoughts on how the Imagineers captured his beloved character. Check it out!

It’s been a while since you were in Raiders of the Lost Ark, but obviously, that was a huge part of your life. When you visit Jock Lindsey’s Hangar Bar, does it bring you back to those days?

“Yes! Jock Lindsey’s Hangar Bar represents the essence of what I’ve done and continue to do every day. I’m still an active pilot for a charter company and I also help deliver airplanes all over the world. That’s actually how I got the role of Jock Lindsey—I was helping the film crew look for a plane to use in movie and they also needed someone to help deliver and get it set up, then I was asked if I would be interested in portraying Jock Lindsey!”

What’s your favorite item on the menu at Jock Lindsey’s Hangar Bar?

“That’s a tough one—I’d have to say the Reggie’s Revenge cocktail.”

Walt Disney Imagineers are known for their storytelling and attention to detail. Do you think they got it right with Jock Lindsey’s Hanger Bar?

“They nailed it! The fact that it looks like exactly like an old airplane hangar and it’s located right on the water where you can hear the water and boats, it’s just perfect.”

Do fans still recognize you? If so, what’s that like?

“Sometimes. My favorite interactions with fans sometimes happen by accident. We’ll be talking about Indiana Jones and then I mention something like “Well you know, I was Jock Lindsey…” and they say “You mean…”Jock start the engine?!” It’s amazing how many fans remember that small scene.”

You’ve had a full career and travel has been a big part of your life. When you travel to Disney Springs, what’s your favorite go-to spot?

“I actually love just watching those amphicars at The BOATHOUSE! I almost bought one.”

Of all the places you could have picked to celebrate your birthday, you came here – why was this spot the right choice for you and your guests?

“I wanted to pick a venue that reflected 70 years of my life and Jock Lindsey’s Hangar Bar truly represents everything I enjoy about my life and the career I’m so passionate about.”

Anything else you’d want to share with readers of the Disney Parks Blog?

“I appreciate the fans so much. Jock Lindsey represents the idea of adventure and dreams and being able to bring that to others and see their faces light up is simply amazing. I would tell readers to never stop dreaming and taking adventures in life—you’ll never know what will happen!”