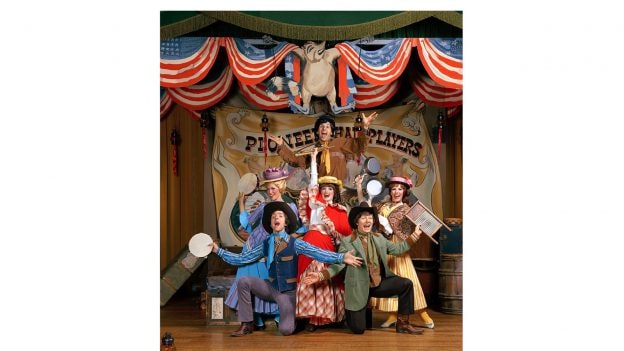 The Disney legacy is fundamentally about bringing beloved cultural ideas from the past forward and reinventing them; or reintroducing their basic stories, experiences, or values to new generations. This month, a somewhat peculiar—but nonetheless mighty—example of that legacy celebrates 45 years of bringing Walt Disney World Resort guests iconic characters, foot-stompin’ music, corn-pone comedy, buckets of fried chicken … and strawberry shortcake.

Hoop-Dee-Doo Musical Revue at Disney’s Fort Wilderness Resort debuted on June 30, 1974, and is today one of the longest-running dinner shows in American history—and a beloved tradition for generations of resort visitors.

Disney’s Fort Wilderness Resort & Campground officially opened on November 19, 1971. Nestled in 750 acres of pine and cypress forest, the Resort recalls the timeless beauty of the American wilderness. Teeming with wildlife such as deer, ducks, rabbits, and even armadillos along the scenic woodland trails; Fort Wilderness is adjacent to Bay Lake and near Disney’s Wilderness Lodge.

The Art Collection at Walt Disney Imagineering contains some beautiful concept work by Dorothea Redmond for a never-built outdoor “Village Stage” a performance area fronting a fanciful “Western Town” that could be used for daytime or night time entertainment.

Disney Legend Sam McKim created a majestic rendering of what would be Pioneer Hall, an impressive rustic indoor performance venue built from 1,283 hand-fitted pine logs from Montana and 70 tons of stones from North Carolina, which opened on April 1, 1974. An inauspicious debut act, a country-Western musical act called “The Star-Spangled Washboard Band,” opened the Hall, according to a historical timeline by Larry Billman, author/writer and Disney entertainment consultant, who was the author and writer of the original show.

Bob Jani, then-director of Entertainment for both Disneyland and Walt Disney World Resorts, hired Billman when he saw the potential for a “dinner theater show” at Pioneer Hall.

It’s easy to forget that in its early years, Walt Disney World presented a fairly limited range of activities and experiences, beyond the single theme park that typically closed at 6:00 p.m. Those on-property vacationers needed more and a greater variety of evening and out-of-park entertainment to fill their days and nights.

“The real genius behind Hoop-Dee-Doo was Larry Billman,” says Forrest Bahruth, the original choreographer and a longtime veteran of Disney Parks & Resorts Creative Entertainment. “He was a great movie buff, and he loved Hollywood.”

As Billman began developing the dinner show idea it evolved from something called  “We’re With You, Mother McCree!” to “Whoop-Dee-Doo-Revue,” and Billman’s love of Hollywood resulted in the basic character structure of the show.

Bahruth recalls, “He said, ‘I want the comic, kind of a Gabby Hayes type that you see in Western movies, and  a Calamity Jane-type that would be the leading lady, they could be the comic duo—and I want to have every leading man and every leading woman you’ve ever seen in the Hollywood movie, and a dance couple like Marge and Gower Champion…’ He wanted to craft that, and working through that lens of old Hollywood, we ended up with a solid cast of characters.”

Naturally, the music is a large part of the revue’s timeless appeal. Bahruth remembers, “Billman wanted me to choreograph and stage it, so I was there from the beginning. My mom used to be a singer, and she had a collection of antique music. I remember sitting one time in my garage with Larry, going through old music, things that could possibly work for the show.”

In the final revue, most of the songs are parodies of actual songs previously recorded by top artists. Principal songwriter was Tom Adair, who also wrote words for the score for Disney’s “Sleeping Beauty” and the TV series “Mickey Mouse Club.” Former Disney entertainment producer Ron Miziker said, “Tom was brilliant.  You could tell him the idea, theme, or play some music and he would have the lyrics for the song in no time. He was the quickest songwriter I ever knew.” (Over the years, the music has changed little, the one exception being the 1979 replacement of “Apple Pie Hoedown” with “Strawberry Short Cake Walk,” when shortcake replaced apple pie on the menu.)

Reed Jones, Director of Creative Development for Disney Parks Live Entertainment says “The simplicity of it is that the show has something for everyone. Six Bits’ humor is really that of a child, a young boy—so kids thinks he’s funny. Even though they may be, in their daily lives, addicted to video games and television and everything modern, and have no idea about the 1880 time period, just to see  an adult who giggles at the same kind of things they giggle at—it connects.

“The characters in the show are those iconic ‘types,’ and each winds up being a reflection of many people in the audience as well.”

“Of course the endless buckets of fried chicken and ribs play a starring role, too,” says Pam Brandon, food writer for Walt Disney World Resort and Disneyland Resort. “Today, servers dish up about 900 pounds of fried chicken every night, and cooks spend about six hours each day just breading the chicken. Add 400 pounds of pork ribs, slow cooked starting at 11 a.m. daily on a big outdoor smoker. For sides, there are 120 pounds of corn, 400 pounds of potatoes to be mashed and 30 gallons of baked beans. It takes 15 gallons of strawberries and 12 gallons of whipped cream to make dessert. Add beer, wine, sangria and soft drinks, and you got a formula for fun…”

That fun includes a dedicated wait staff, many of whom have been working at Pioneer Hall for decades. Reed Jones says, “They have a following, too, just as the stage cast does. They have seen kids grow up, because the families would continue to come back. When they make a show reservation, guests will request a certain server that they’ve seen over the course of ten or twenty years. It’s really like coming home for a lot of people. It’s like a family reunion with your crazy aunts and uncles onstage. You all come in and you’re all a part of it.”

Some people see a simple, unpretentious, good-clean-fun show such as Hoop-Dee-Doo Musical Revue as the height of “corny.” Reed Jones says, “Usually, describing something as corny is considered a bad thing – sort of an insult to the piece.” But at Disney, “corny” is a compliment, established by Walt Disney himself.

Walt Disney’s daughter, Diane recalled that, when she was a teenager, her father’s unabashed sentimentality and simple emotional communication embarrassed her sometimes. “And I would sit there…and say, ‘Oh, that’s corny.’”

Walt replied, “All right, I am corny. But I think there’s just about 140 million people in this country just as corny as I am.”

“Hoop-Dee-Doo was upbeat, and guests came for the corny jokes, good food and lots of fun,” says Forrest Bahruth. “Forty-five years later, the heart is still in it, the energy is still there.”