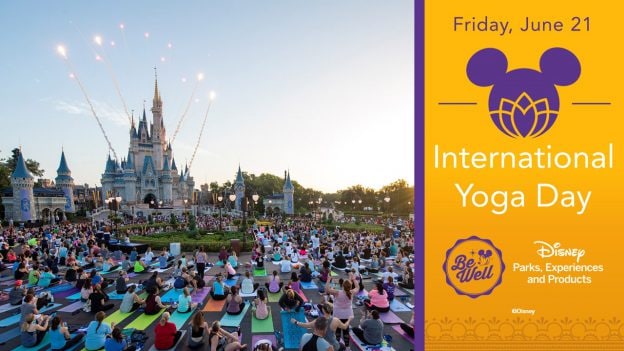 June 21 was International Yoga Day. To celebrate, we hosted thousands of cast members for cast-exclusive yoga events at special locations across Disney Parks and offices around the world. Today we’re excited to share a global look at the celebrations and the magical moments that took place!

Here at Disney we have a rich history of creating magical, memorable experiences, and not just for our guests, but for our cast members, too! From watching the sun rise over Cinderella Castle at Walt Disney World Resort, to stretching out at Aulani beach at Aulani, A Disney Resort & Spa, our cast members found their inner balance at the start of their day– and with some beautiful views! These International Yoga Day events continue our commitment to deliver unique experiences for cast. With events like this, Disney continues to encourage healthy living and self-care, while supporting cast member balance and wellness.

Now let’s take a trip around the world to see the incredible sights of how cast members celebrated International Yoga Day.

At Disneyland Resort, cast members gazed at Sleeping Beauty Castle during a calming yoga session before welcoming guests for the day.

In Magic Kingdom at Walt Disney World Resort, more than 1,650 yoga mats were rolled out in front of Cinderella Castle for an exciting event complete with fireworks!

At Disneyland Paris, cast members collected at Walt Disney Studios park for a peaceful session at Production Courtyard in front of Tower of Terror.

At Tokyo Disney Resort, cast members gathered in office sessions where they worked through some moves to get moving for the day ahead.

At Hong Kong Disneyland, Tomorrowland set the stage for cast members who enjoyed a relaxing morning of yoga in the park.

In Burbank and Glendale, cast members partook in relaxing flow sessions to kick off their Friday morning.

Cast members at Aulani, A Disney Resort & Spa, said aloha to their morning session that was paired with a Hawaiian sunrise and the tranquil sounds of breaking waves and swaying palm trees. What a view!

We’re proud to have hosted these experiences for cast members and to share the celebrations with you! Did you tune in for our livestream or see our special around the world takeover on the @DisneyParksBlog Instagram? You can revisit our Disney Ambassadors showing you their favorite yoga poses on our “Yoga Day” highlight on Instagram and check out the livestream via our Disney Parks Blog replay!