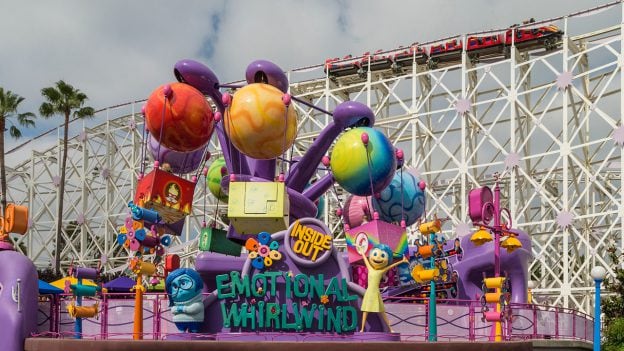 Take a Sense-ational Spin Around Inside Out Emotional Whirlwind, Now Open at Pixar Pier in Disney California Adventure Park

Inspired by the hit Disney and Pixar film “Inside Out,” Emotional Whirlwind takes you a sense-ational spin while aboard one of eight Memory Movers. Help Riley’s Emotions—Joy, Sadness, Anger, Disgust and Fear—sort through memories being collected.

Also starting today, guests can share an “emotional” visit with Joy and Sadness along Pixar Pier.

Emotional Whirlwind is located in the Inside Out Headquarters neighborhood of Pixar Pier, which recently celebrated its one-year anniversary! The reimagined land shares the stories and characters of Pixar films with exciting attractions, themed neighborhoods and fun eateries.