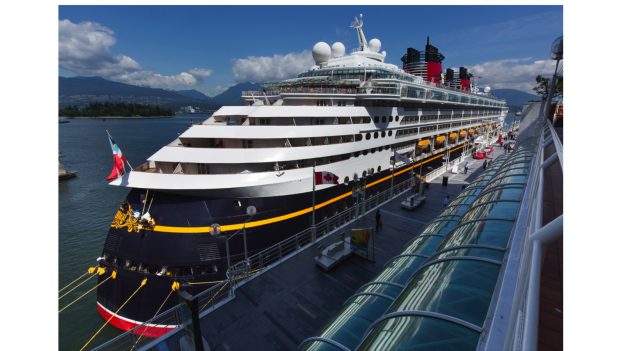 For the 8th straight year, the Vancouver Fraser Port Authority has awarded Disney Cruise Line a Blue Circle Award for our voluntary efforts to conserve energy and reduce emissions while the Disney Wonder is in the Port of Vancouver.

During the summer when Disney Wonder is docked at the Port of Vancouver for our Alaska voyages, we’re able to turn off the engines onboard and use shore power technology to “plug in” to the port’s electrical grid. This eliminates air emissions and powers the ship’s normal operations, such as lights, A/C, etc., with energy that has already been generated from renewable sources in Vancouver like hydro power and wind power. Pretty cool, huh?

Three of our Disney Cruise Line ships are specially designed to use shore power when it’s available at ports of call around the world. Plugging in to shore power technology is just one of many ways that Disney Cruise Line strives to minimize our impact on the environment. You may have heard that most recently we announced the elimination of plastic straws, cutlery, stirrers, shopping bags and condiment packets all in an effort to significantly reduce the amount of single-use plastic used onboard.

Be sure to check out more about Disney Cruise Line environmental efforts.