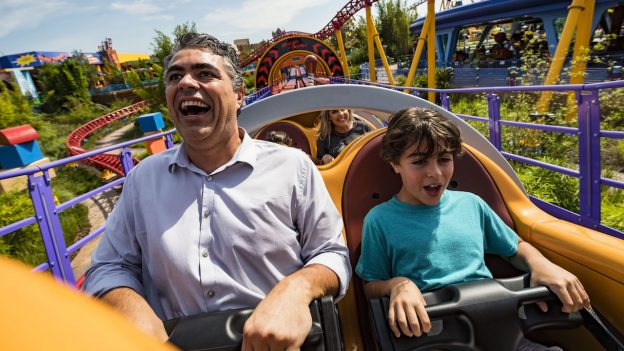 With “Toy Story 4” opening in U.S. theaters in just hours, we’re continuing our celebration of the film at Disney Parks with a special look at some must-do’s when you visit Toy Story Land at Disney’s Hollywood Studios and “shrink” to the size of a toy to explore the world of Woody, Buzz Lightyear, and friends.

Alien Swirling Saucers – Designed to look like a toy from Pizza Planet, guests at Toy Story Land can take a spin on this exciting attraction where adorable little green aliens swirl about in their flying saucers with guests in tow in their rocket ship toys – while “The Claw” hangs overhead.  Check our earlier Alien Swirling Saucers story for more details.

Slinky Dog Dash – As many of you know, Slinky Dog Dash is a family coaster themed as if Andy built it in his backyard using his Mega Coaster Play Kit and some other favorite toys, including Jessie and Rex!  The attraction’s ride vehicles – inspired by the character of Slinky in the film – send riders dipping, dodging and dashing around turns.  Ride along with Slinky Dog Dash now.

Toy Story Mania –  Guests take off on this exhilarating 4D arcade attraction starring all of Andy’s toys! During each ride, you board a carnival-inspired tram and use your spring-action shooter to take your best shot at an array of moving targets.  You can compete with other players for the highest score on all the fast-paced games. Check it out for yourself.

Character Greetings – And at Toy Story Land, some of Andy’s favorite toys are playing in his backyard—and making new friends.  You can say howdy to Sheriff Woody, yodel a hello to Jessie the Cowgirl and show Buzz Lightyear your best Space Ranger salute.  Also, Bo Peep from “Toy Story 4” is now greeting guests.

What’s your favorite must-do?  Let us know in the comments. And be sure to watch Disney and Pixar’s “Toy Story 4” in theaters on Friday, June 21 and then begin your own adventure in Toy Story Land at Disney’s Hollywood Studios.