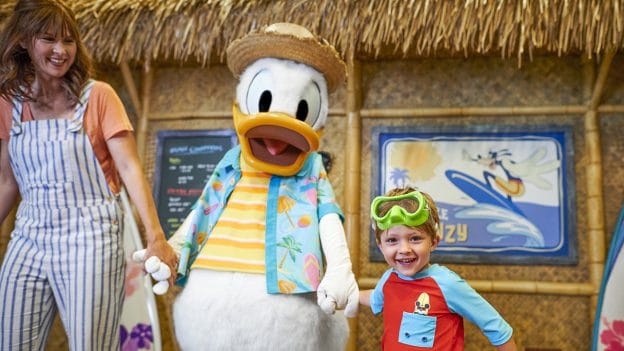 Everyone’s #1 duck, Donald Duck, is celebrating 85 years this weekend. Known for his fiery temper, this character has been quacking up guests at Disneyland since 1955. However, Donald made his animated debut in the Silly Symphony, “The Wise Little Hen,” on June 9, 1934.

Here are a few ways to commemorate Donald Duck at the Disneyland Resort—this weekend and beyond.

“Mickey’s PhilharMagic”: The spectacular magic of Disney animation comes to life in the 3D movie musical “Mickey’s PhilharMagic” starring Mickey Mouse, Donald Duck and other favorite Disney characters. As Donald prepares the orchestra for Mickey, he comes across the conductor’s baton and Mickey’s Sorcerer’s Hat. A little magic goes a long way and proceedings go awry as Donald is unexpectedly plunged into a high-definition 3D dream world and you’re taken along for the ride!

Merchandise: Don your “Donald-best” with fun headwear and apparel. Favorites include the Donald Feet Headband, baseball cap, pins, whistle and more. If you can’t get enough of this sailor duck, be sure to take home a classic Donald Duck plush!

Donald Duck’s Seaside Breakfast: Head to Disney’s Paradise Pier Hotel where Donald brings beachy fun to Disney’s PCH Grill for breakfast and brunch! Catch some waves on the dance floor with Donald, Daisy and Stitch as you chow down on an all-you-care-to-enjoy breakfast buffet. This Sunday, PCH Grill is celebrating Donald’s birthday with celebratory moments each hour! If you want to hang out with Donald and friends while chowing down on some delicious grub, click here to book your reservations or call (714) 781-DINE (714-781-3463).

Specialty Eats: Treat yourself to Donald-inspired bites, including:

If you see Donald waddling around the Disneyland Resort, be sure to wish him a Happy Birthday!