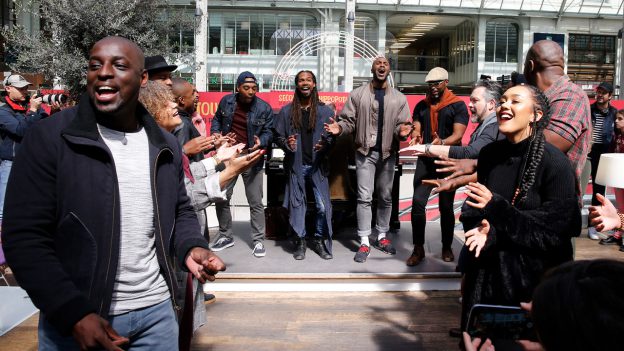 Travelers at the Gare de Lyon train station in Paris were surprised last week by a vocal performance from a troupe of singers featured in Disneyland Paris’ new original show, “The Lion King: Rhythms of the Pride Lands.” In honor of The Lion King and Jungle Festival coming to the resort on June 30, travelers were treated to a stunning rendition of “The Circle of Life” with an accompanying piano at the train station, renamed Gare du Lion for the occasion.

Through June 11, Disneyland Paris and BETC are bringing The Lion King to life with more than 60 screens that will simulate cheetahs, elephants and giraffes accompanying travelers on their way to the RER A line platform. Lucky travelers may even see the animals from the savannah bowing toward them just like the legendary opening scene of the classic Disney film.

The Lion King and Jungle Festival starts at Disneyland Paris on June 30, so plan your next visit now! Disneyland Park guests can soon move to the beating drums and songs from the savannah during “The Lion King: Rhythms of the Pride Lands,” become the ‘King of the Swingers’ with Baloo and friends during “The Jungle Book Jive” show and head over to Adventureland to stomp to Timon’s “MataDance.” This season promises to be extROOAARdinary!