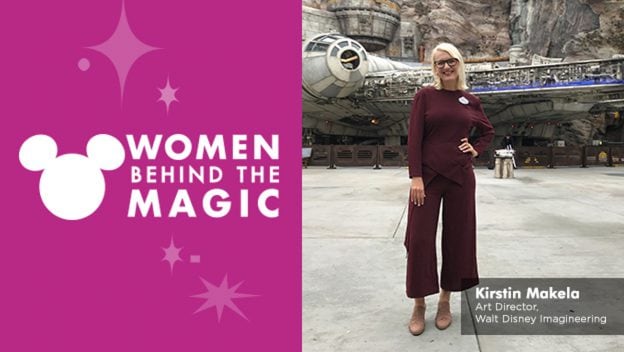 As guests take in the breathtaking vista of Star Wars: Galaxy’s Edge, they may discover a multitude of hidden gems and details like petrified trees and ancient dwellings, and they have Kirstin Makela, Art Director at Walt Disney Imagineering, to thank for that! In our next installment of our #WomenBehindtheMagic blog series, we’re excited to introduce you to Kirstin and her almost eight year Imagineering and decade-long design career that led up to her being an important force behind the magic of the new land.

For Kirstin, no two days on the job are the same. To help bring Star Wars: Galaxy’s Edge to life, a typical day could mean meeting with interior designers, leading paint crews, or even consulting with the horticulture team to determine how to best incorporate natural elements into the land. With a land as innovative and detailed as Star Wars: Galaxy’s Edge, now open at Disneyland Resort and opening August 29 at Walt Disney World Resort, she says it’s the diverse range of elements and challenges that keep the job exciting. A job that as a child, first piqued her interest because of the attention to detail that make Imagineering projects special.

“I was seven years old when my parents first took me to Walt Disney World and I was immediately enamored with the immersive storytelling that was around me,” explained Kirstin. “The love and care in every little detail had me hooked!”

In college, Kirstin went on to study visual communication with an emphasis on graphic design and illustration. She later participated in museum internships where she was able to grow her skillset on exhibit design teams.

“My internships were transformative,” Kirstin shared. “The ability to flex my muscles as a working designer gave me the confidence that I needed to apply to Disney Professional Internships before my graduation.”

She began her Disney journey as an intern with Disney Consumer Products before starting as an Imagineer and considers herself lucky to continue to work on inspiring projects that delight Disney Parks guests every day, just like Star Wars: Galaxy’s Edge.

“A lot of my professional satisfaction as an Imagineer comes when I’m being pushed to new limits,” said Kirstin. “I have gained an invaluable amount of new knowledge from the exposure that I had to everyone from carvers and painters to engineers and electricians. I truly feel like I became a better Imagineer on Batuu!”

Kirstin and her team worked to perfect the stories of the Batuuans that had traveled through the historical space centuries ago. These very stories now mean guests can visit the Creature Stall or find a new trinket at Toydarian Toymaker.

“We thought about where citizens may have grazed against the walls and left hand oils, or where merchant carts may have bumped into walls and left scratches and dents,” Kirstin shared. “We even included soot stains out of the kilns and ovens, so that they appear to have been used for decades.”

For Kirstin, there’s no greater satisfaction as a designer than being able to see her ideas constructed and turned into a reality, like Star Wars: Galaxy’s Edge.

“Sometimes, I’d take a moment to pause in the middle of our land, give my arm a little pinch and think to myself, ‘I can’t believe I get to be part of such a big moment in Disney Parks history,” Kirstin explained.

Kirstin finds excitement in pushing herself to keep climbing higher. With Star Wars: Galaxy’s Edge now open at Disneyland Resort and soon to open at Walt Disney World Resort on August 29, she’ll be applying the experience and learnings she gained from working on the land as she tackles new projects and explore new stories.

Kirstin’s advice for aspiring Imagineers is to always stay curious, absorb every experience –no matter big or small, and to remember that as Imagineers you rely heavily on your personal stories for project inspiration, so remind yourself that you never know what past experience might spark inspiration.

Kirstin is one of the many women making magic for Disney guests and fans around the world, whose stories we can’t wait to tell in our #WomenBehindtheMagic series. Stay tuned for the next story in this series, as we share the stories of some of the amazing women who played a role in the creation of Star Wars: Galaxy’s Edge!