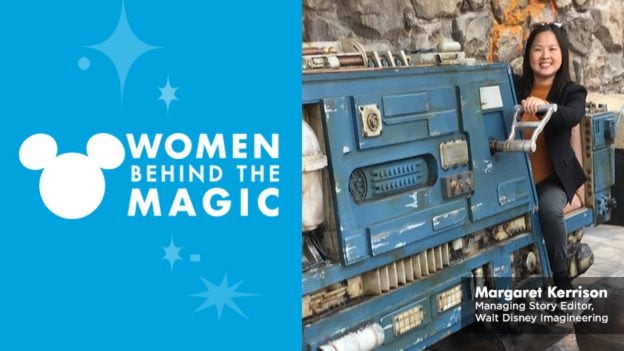 Women Behind the Magic: Margaret Kerrison on Inspiration and Developing the Story of Star Wars: Galaxy’s Edge

Around the world, women are making magic for Disney guests and fans each and every day, in a variety of amazing ways. Today, to kick off our new #WomenBehindtheMagic blog series, we’re excited to introduce you to Margaret Kerrison, Managing Story Editor at Walt Disney Imagineering, and Story Lead for Star Wars: Galaxy’s Edge, now open at Disneyland Resort and opening on August 29 at Walt Disney World Resort.

To tell the new story of Black Spire Outpost and create a place where guests can live their own adventures, Margaret immersed herself in the Star Wars universe, watching films and animated series, researching books and more to understand what makes Star Wars, Star Wars. From props and characters throughout the land to unexpected details, Margaret has spent years creating the world that guests can explore at Star Wars: Galaxy’s Edge.

“What’s most important to me, as a storyteller, is how people feel when they walk into the land,” she says. “We want our guests to feel encouraged to explore and discover every corner of Black Spire Outpost.”

For Margaret, being a storyteller and a creator of immersive experiences was a dream from a very young age, when she first visited a Disney Park with her family. When she was just seven years old, Margaret’s family took a trip to Tokyo Disney Resort and she remembers the visit opening her mind to a world of imagination that inspired her to pursue storytelling.

Growing up, Margaret found all sorts of ways to tell stories and entertain, whether through the use of handmade finger puppets or casting family members in recorded skits at home. She was passionate about different places, people and cultures. Then, when she discovered themed entertainment in film school, she knew she wanted to make a career that involved immersive stories. “I remembered going to Haunted Mansion and being blown away by the storytelling and attention to detail,” she says of that early trip to Tokyo Disneyland. “I was scared, excited, curious and enthralled all at the same time.”

After working for years with museums, corporate branding and other types of themed entertainment, Margaret applied to a writing position at Walt Disney Imagineering without hesitation. “When it comes to immersive worlds, no other company does it better. I knew Imagineering was where I wanted to be.”

With a multicultural background – she was born in Indonesia, raised in Singapore, is Chinese in ethnicity and studied in American schools – Margaret says she doesn’t see the world through one type of lens, but instead considers how different kinds of people interpret stories as she works. She put her passion for learning about different people and places to work as she collaborated with the Lucasfilm Story Group to bring the planet Batuu to life, where galactic travelers may encounter Resistance fighters, First Order officers or local residents with their own perspectives and tales to tell.

“I heard a good quote recently, ‘We don’t see things as they are. We see things as we are.’ Imagine a world where all of us have the opportunity for meaningful relationships with people from different backgrounds. We can see everything through other people’s eyes and not only our own,” she says.

Looking to the future, Margaret says that the best advice for aspiring storytellers and Imagineers is “to do one job well, but be open to jumping in and taking the reins for other tasks that come along. You never know where different roads will lead you,” she says.

“Don’t be afraid to speak up, take the lead and give your suggestions, but also don’t be afraid to say ‘no.’ It truly is a constant balancing act, but the day you can finally walk into a land, attraction, resort or experience that you’ve worked on and see the faces of our guests, it’s all worth it. That feeling is priceless.”

Check back next week for another installment in our #WomenBehindtheMagic series, as we tell the stories of remarkable women who played a role in the creation of Star Wars: Galaxy’s Edge!

Likes (11)
Share Women Behind the Magic: Margaret Kerrison on Inspiration and Developing the Story of Star Wars: Galaxy’s Edge