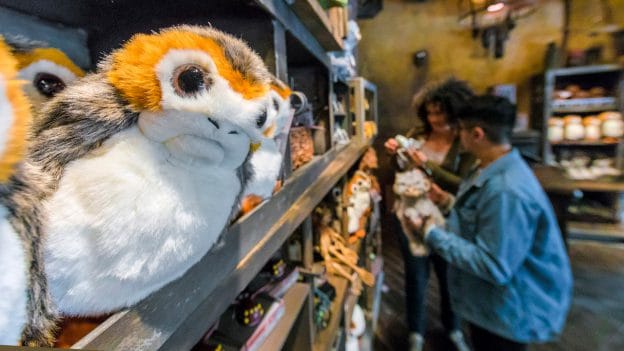 The planet of Batuu is bustling with creatures and aliens that serve integral roles within Star Wars: Galaxy’s Edge. Find exotic creatures in the merchant stall or encounter aliens running their own businesses. As you journey through the land, you may come across these creatures and aliens along the way:

In Batuu, Dok-Ondar is the proprietor of a unique intergalactic curiosities shop, Dok-Ondar’s Den of Antiquities. He is an alien hailing from the planet Ithor. When visiting his collection, be prepared to see a variety of oddities, from taxidermic creatures to holocrons and more. Some travelers know him as the “gatekeeper” of the black market in Black Spire Outpost, so try not to cross him! While taking inventory, he is known to order his assistants around between incoming calls.

Sometimes mistaken for plants, ollopoms are gentle aquatic rodents found in the Gungan swamps of the planet Naboo. Naboo is the home planet of Padmé Amidala, as well as the Gungan Jar Jar Binks from “Star Wars: The Phantom Menace.” You can find one of these fascinating creatures of disguise, Ollie the ollopom, bobbing in the water when visiting Dok-Ondar’s Den of Antiquities. Ollie was a gift from Hondo, who found it in an unmarked cargo.

This infant sarlacc, named Simpi, may seem adorable to some, but this creature is the same type of carnivorous giant seen in the sand pit in “Star Wars: Return of the Jedi.” Growing up to 100 meters long, the massive mouth of these sarlaccs can turn someone’s good day to bad if swallowed whole! Dok-Ondar keeps this little sarlacc (procured by none other than Han Solo and Chewbacca as told in the Marvel Star Wars comic series Star Wars: Galaxy’s Edge) in a special tank that simulates arid atmospheric conditions.

For visitors that remember “Star Wars: The Clone Wars” and “Star Wars Rebels” animated series, Hondo Ohnaka is the infamous Weequay pirate turned “legitimate” businessman that may or may not serve as a smuggler now on Batuu. When boarding the fastest hunk of junk in the galaxy on Millennium Falcon: Smugglers Run, you’ll encounter Hondo instructing new recruits on his mission to deliver coaxium, which is of importance to both the First Order and the Resistance. If you decide to deliver the restricted items for his business, Ohnaka Transport Solutions, don’t expect any of the profits!

Wampas are accustomed to the cold weather on the planet Hoth. These carnivorous creatures are covered in white fur, horns and claws for survival. You may remember seeing an encounter with one during Luke Skywalker’s Hoth adventure in “Star Wars: The Empire Strikes Back.” Thankfully on Batuu, Dok-Ondar has secured a taxidermic wampa for spectators to admire, as well as other taxidermic creatures on the wall. This prized possession is worth a look when you visit Dok-Ondar’s Den of Antiquities.

Dianogas are slimy, tentacled carnivores that thrive in dark hiding places. For visitors that remember “Star Wars: A New Hope,” a Dianoga attacked Luke Skywalker in the Death Star trash compactor. Now, you can spot two hiding on Batuu. Next time you stop to drink at the water fountain in the Black Spire Outpost marketplace, check to see if the eye of “Tiny” pops out of the water tank above. If you want to see a juvenile known as “Toothy” in Dok-Ondar’s Den of Antiquities, peek inside the tank and see it up close!

An adoptable creature is the frog-like worrt found at the Creature Stall in the Black Spire Outpost Marketplace. This carnivorous amphibian is a native to the planet of Tatooine, famously seen outside Jabba the Hutt’s palace in “Star Wars: Return of the Jedi.” Be careful of its powerful tongue, as it snatches unsuspecting rodents and insects on the way! If you stop by Oga’s Cantina, you can also spot a worrt in one of the amphibian tanks.

There is a plethora of other fascinating inhabitants to be found on Batuu, so keep an eye out during your next visit to Batuu.