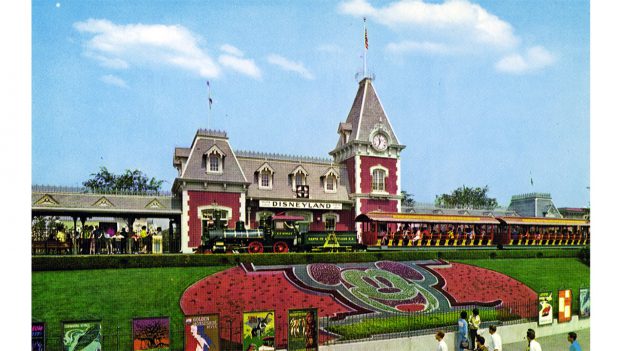 Sir Francis Bacon wrote: “God Almighty first planted a garden, and indeed it is the purest of human pleasures, without which edifices are but gross handiworks. And we shall ever see that as ages grow to civility and elegance, man comes to build stately sooner than to garden finely, as though gardening were the greater perfection.”

This lofty philosophy had not greater advocate than Walt Disney, whose view of the Disneyland experience was to create a completely involving and realistic setting in which guests were a part of an encompassing show. “To achieve the right effect,” Walt said, “our Disneyland landscape architects combined their talents with those of builders and maintenance personnel and created a believable and authentic scene of nature’s own design.”

The importance of landscaping, trees, plants, and flowers in his amusement park idea was heavily influenced by Walt’s love and appreciation of the great Tivoli Gardens park in Copenhagen, Denmark.

Walt visited the famous 1844 landmark in 1951 with his friend, TV personality (and Disney Legend) Art Linkletter. “It seems that Walt was incredibly impressed by how clean and organized the park was compared to the seedier carnival-style amusement parks he was used to back in the US,” wrote Leonard Kinsey in the Baltimore Post-Examiner. “[Linkletter] recalled him furiously scribbling notes the whole time, about everything from the gardens to the food to the chairs they were sitting in…when Disneyland opened four years later in 1955, it definitely bore a strong resemblance to Tivoli, from the perfectly manicured landscaping, to the extensive use of waterways and intricate lighting…”

As was typical, Walt assembled a unique team of experts to bring Disneyland into bloom. “In giving credit for the landscaping at the Park,” Walt wrote in the foreword to the 1965 book “Disneyland World of Flowers,” “it is impossible to mention all who have contributed. Special plaudits are due to Ruth Patricia Shellhorn for her design of the formal Victorian plan for Main Street, the Town Square, and the Plaza. The trees and shrubs she selected in the spring of 1955 are still used.”

Little-known in the Disney lexicon today, Shellhorn (1909-2006) was a Los Angeles-based landscape architect known for the development of an “indoor/outdoor” style of living that came to be known as the “Southern California Look.” During her nearly six-decade career she designed residences, retail, city and regional parks, universities, and colleges; “Shellhorn’s many private gardens in Los Angeles and Pasadena were elegant, exotic, and among the most horticulturally distinctive of their day,” the Library of American Landscape History (LALH) says.

Her most famous designs include the Bullock’s department stores (described by the LALH as “lush gardens and fountain-filled courtyards that lured shoppers with the promise of the ‘Southern California experience’), the Fashion Square shopping centers at Santa Ana, Sherman Oaks, La Habra and Del Amo in Torrance. Perhaps because of her early departure after initial design was completed, and her lack of any tendency toward self-promotion, Shellhorn is seldom associated with her Disneyland work, but deserves credit and recognition nonetheless.

More frequently given sole credit for the Disneyland gardens is third-generation horticulturist Morgan “Bill” Evans, and his brother, Jack, who had landscaped the grounds of Walt Disney’s Holmby Hills home, including the gardens that surrounded his backyard railroad, the Carolwood Pacific. 1954, Walt asked Bill “How about you fellows landscape Disneyland for me?”

“We landscaped all of Disneyland in less than a year, with a maximum of arm waving and a minimum of drawings,” Evans said of the project. His forthright approach and innate understanding of how landscaping fit into the art of place-making was a talent that must have not only pleased Walt aesthetically, but was a godsend to his evolving design and construction of Disneyland. Evans quite simply knew how to use his medium for storytelling. He was as much an artist with living plants as Sam McKim was with pen, ink, and paint; or Blaine Gibson was with clay. Evans knew how to use his palette to inform and add to the overall story being told without his work taking center stage. Evans continued to craft Disney’s horticultural myth-making or nearly half a century thereafter.

In her book “The Making of Disney’s Animal Kingdom Theme Park,” Melody Malmberg recounts the three-part philosophy of this master landscaper and acknowledged leader in the field. “The first consideration was guest comfort—shade and shelter. The second was screening visual intrusions—creating a berm, a ring of earth and vegetation surrounding the park to hide the real world; or using strategic planting that camouflaged a building or electronics or lighting. The third principle was telling a story through landscaping—creating the right look for the setting, from the mixed broadleaf forest of Tom Sawyer’s Mississippi River banks to the serene gardens of Japan.”

This philosophy continues to be a fundamental one in the creation Disney Parks and Resorts all around the world, and a standard initiated by Walt that remains a core value today.