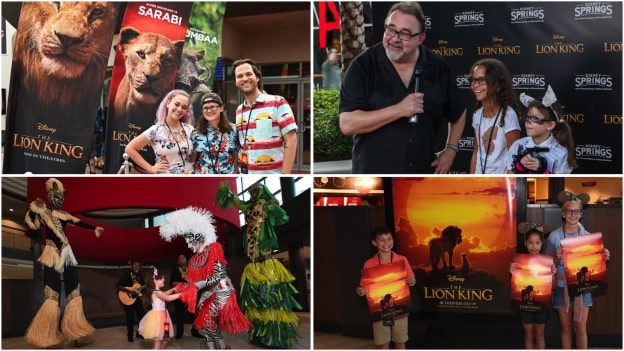 During the event, special guest Don Hahn, who is one of the original producers on the animated “The Lion King,” stopped by to spend time with fans.  Don, who loves the characters Pumbaa and Timon, took the stage and talked about the legacy of “The Lion King” and how the story has continued to resonate with audiences for more than 25 years. He also hosted a special inside look at the event especially for Disney Parks Blog readers!

The night also included a variety of photo opportunities before and after the film at Disney Springs. Several readers posed with stilt walkers and other performers and musicians during “The Lion King” celebration.

As you may know, Disney’s “The Lion King” journeys to the African savanna where a future king is born. Simba idolizes his father, King Mufasa, and takes to heart his own royal destiny. But not everyone in the kingdom celebrates the new cub’s arrival. Scar, Mufasa’s brother—and former heir to the throne—has plans of his own. The battle for Pride Rock is ravaged with betrayal, tragedy and drama, ultimately resulting in Simba’s exile. With help from a curious pair of newfound friends, Simba will have to figure out how to grow up and take back what is rightfully his.

Thank you to everyone who made “The Lion King” meet-up so magical.   If you weren’t able to join us, be sure to see Disney’s “The Lion King’ in theaters now.